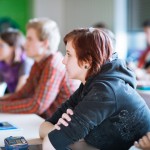 The prevalence of depression goes up sharply in mid-adolescence and it’s estimated that by age 19 up to 20% of people will have suffered from at least one episode of clinical depression.

So it makes sense that prevention programmes should be targeted at young people in schools, and indeed, published research has shown that classroom-based psychological interventions can be effective at preventing depression in adolescents. The existing evidence is mixed though, so there is a need for real-world studies that compare interventions with appropriate control groups (including an attention control).

A group of UK-based researchers lead by Paul Stallard from the University of Bath have published a randomised controlled trial in the BMJ that compares the effectiveness of classroom-based cognitive behavioural therapy (CBT) with attention control and usual school provision for adolescents at high risk of depression.

The trial involved 8 non-denominational mixed sex secondary schools from urban and rural locations across the East Midlands and South West of England. 5,030 pupils aged 12-16 were randomly assigned to one of three groups:

These programmes were delivered as universal interventions during PSHE classes from September 2009 to July 2010. All pupils participated in the lessons, irrespective of their depressive state.

Allocation was balanced by school, year, number of students and classes, frequency of lessons, and timetabling. Participants were not blinded to treatment allocation, but the trained facilitators who delivered the interventions were blind to the risk status of the pupils.

So what’s going on here?

This trial compared CBT with placebo (normal PSHE lessons) and an attention control, which previous studies have failed to do. This is important because the placebo response rate in this population is high, i.e. people often just get better of their own accord (regression to the norm).

The trial succeeded in delivering CBT in this challenging environment and recruitment and retention was good, despite the difficulties they found with timetabling and the higher priority of other statutory teaching requirements.

The reliance on self report ratings is a clear limitation of the study design. It’s possible that the diagnostic state of depressed individuals was missed by this approach, after all, young people may well not recognise that they are depressed.

Another potential weakness is the universal programme approach, i.e. involving all pupils in the treatment arms. This type of programme is practically easier to deliver, but it may mean that depressed individuals find it harder to engage with the programme if it’s dominated by peers with fewer symptoms.

Universal programmes tend to have lower treatment effects than more focused programmes, as the general skills delivered may sometimes not have sufficient emphasis to help individuals with greater symptoms.

Clearly, more research is needed to inform this interesting area. It takes time to develop public health policy, particularly in a complex area such as mental health, so I’m sure that this is not the last we’ve heard about using CBT in schools to help prevent depression.