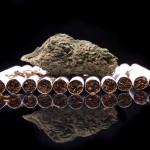 The relationship between cannabis and psychosis has been one of the hottest topics in psychiatry over the last decade, and with good reason. Policy-makers still disagree on whether cannabis should be legalised or how it should be classified, with Uruguay being the most recent country to legalise it.

Drawing broadly from work initiated by Robin Murray, at King’s College, links have been made between the use of cannabis and increased relative risk of developing psychosis (Arseneault et al, 2004), as well as decreased age of onset of psychosis (Large et al, 2011).  What is sometimes forgotten is that a significant number of people smoking cannabis are concurrently exposed to another substance – nicotine. We know, clinically, that people with psychotic illness smoke more than the general population, though this has usually been ascribed to “self-medication”.

What if some of the increased risk of psychosis could be explained by cigarette smoking?

In this population study, taken from one of the best longitudinal datasets available (ALSPAC), Gage and colleagues sought to ascertain the relationship between smoking cigarettes, cannabis use and psychotic-like experiences (PEs) in a population survey.

The ALSPAC (Avon longitudinal study of Parents and Children) cohort is a population-based birth cohort study, and this study used data from 4,716 young people who completed the PLIKSi (Psychosis-like symptoms interview), a semi-structured questionnaire, at age 18.

Data on cannabis use and cigarette smoking was taken from self-report at age 16. Use of each substance was categorised, according to frequency:

A number of risk factors implicated in the aetiology of psychosis (such as family history of schizophrenia/depression, childhood adversity, urban dwelling, IQ and use of illicit substances) were also measured.

The authors then used ordinal logistic regression, looking at the relationship between various levels of exposure and experience of psychotic-like symptoms, adjusting for various risk factors, which may have confounded the relationship. The authors were unable to examine the effects of cannabis alone (without nicotine), as only 3 people used cannabis in this fashion. 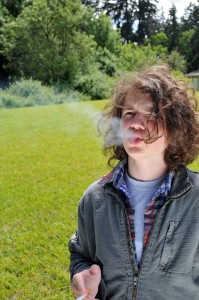 A major strength of this study was the longitudinal design, and the use of measures that have valid psychometric properties;-the PLIKSi appears to be a lot more robust than other measures, like the CIDI, which tends to have a high false-positive rate, when compared to clinical interview (Jauhar et al, 2011).

The authors were able to control for confounders, which other studies have not been able to do, and also able to measure cannabis and cigarette use concurrently, and tease out the effects of cannabis on the increased risk associated with cigarette smoking (something very few other studies have done). They also measured use of cigarettes in a non-dichotomised fashion (i.e. smoker/non-smoker), picking up more subtle effects of use, in particular daily use, which would make more biological sense (daily use of nicotine being more indicative of nicotine dependence).

Limitations are those we tend to see in all large-scale epidemiological studies. All models tend to show associations, as opposed to clear causality, and assumptions made in modelling always tend to have arbitrary cut-offs.

Self-report measures, as the authors themselves point out, are not without their failings, though in a study such as this, it would have been difficult to obtain “direct” measures of use of cannabis and nicotine.

This study also shows that, by the very nature of the way people take cannabis, it is virtually impossible to exclude the effects of nicotine.

This study adds to recent work (Van Gastel et al, 2013), suggesting that psychotic-like experiences appear to be linked as much to cigarette use, as cannabis. In controlling for various confounders they have made the case that researchers will need to look more closely at the effects of cigarette smoking when evaluating risk of psychosis.

Pertinently, when looking at the risks associated with cannabis and psychosis, epidemiologists will need to account for the possible effects of cigarettes.

The intriguing question, which this study does pose, is whether smoking cigarettes could be implicated in the development of psychotic illness: a question that will no doubt be duly addressed by those in the field of psychosis research.