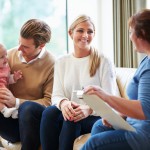 Relationships are not always smooth, particularly when faced with the pressures of modern life. It is often children who suffer the most when parents argue, though relationship problems can impact on parental mental health too. Verbal aggression in relationships, in particular, can lead to problems such as emotional and behavioural difficulties in children, problems settling and achieving at school, or poor physical health (Reynolds et al, 2014).

There is some evidence that parenting programmes (e.g. Webster-Stratton & Reid, 2003) support parents to resolve some of their difficulties, but most people do not seek help or only do so as a last resort. One possible solution is to train practitioners working with children and families to routinely offer support with relationships.

Coleman et al (2014) evaluated a training programme named ‘Relationship support: An early intervention’ with Sure Start Children’s Centre (SSCC) staff. The training used a blended model of learning which involved an online introduction to the Brief Encounters® model followed by a one-day workshop facilitated by two skilled practitioners. The aims of the programme are to recognise relationship difficulties, respond using active listening and solution-focused techniques, and review the need for further support. The training is designed to be implemented alongside practitioners’ usual work. To evaluate the effect of the training on practitioners, the researchers used an outcome questionnaire about three months after the intervention group received their training, but before the control group received theirs. They asked different questions than in their pre-training registration questionnaire as they did not want to prime respondents about the questions which may make it difficult to ascertain real changes. The self-completed outcome questionnaire focused on practitioners reporting about their: The researchers found significantly greater confidence amongst practitioners in the intervention group in each of the five outcome domains (except no. 1 above) than those in the control group. Additional analysis found that length of prior experience of working with children and families, types of practitioner and initial level of confidence was not associated with outcomes, though no data was presented on this.

Although this was a cluster randomised controlled trial, the data was analysed at the level of an individual and it was unclear how clustering by SSCC was dealt with in the analysis.

This study found that SSCC practitioners’ confidence in supporting people with relationship problems is higher for those who have received training than those who have not.

It is possible that the training could be extended to GPs or volunteers to increase the availability of relationship support. Findings showed greater confidence amongst practitioners in the intervention group, but there are important limitations to consider

The findings of this study need to be treated with some caution. Randomised controlled trials are rare in social care and they have the potential to produce evidence of the effectiveness of interventions with minimal bias.

This study has found that practitioners’ confidence in providing relationship support appears to grow with training, but more research is required to investigate the outcomes of this for parents and their children.