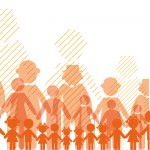 The harmful impact of depression extends far beyond the individual sufferer to caregivers, friends and family members.  Children of people with depression are more likely to suffer from depression themselves.  This may be due to both inherited and environmental factors.

This new randomised controlled trial (RCT), published earlier this week in JAMA Psychiatry, set out to establish whether cognitive-behavioural prevention (CBP) can reduce the incidence of depression in children whose parents are (or have been) depressed.

The RCT was carried out at four different treatment centres in the US. It’s unlikely that the study participants felt good enough to do a Glee-style synchronised jump during the trial, but you get the idea

33 sets of siblings were randomised, a total of 316 participants.  159 children were allocated to the CBP intervention, with 157 allocated to UC.

It’s not clear what the Usual Care regimen was.

Outcomes were measured at baseline, after the acute intervention (2 months), after the continuation (9 mo), 1 year after (21 mo) and 2 years later (33 mo).

The CBP program showed significant sustained effects compared with UC in preventing the onset of depressive episodes in at-risk youth over a nearly 3-year period.

Important next steps will be to strengthen the CBP intervention to further enhance its preventive effects, improve intervention outcomes when parents are currently depressed, and conduct larger implementation trials to test the broader public health impact of the CBP program for preventing depression in youth.