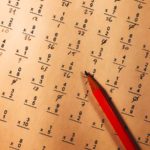 Any secondary school teacher will know the apprehension with which you approach results day in August, of the traffic light spreadsheets and the painstaking analysis that follows the headline excitement. GCSE examination results are the measure used to hold schools and teachers to account, hence much is at stake on that Thursday in late summer.

Rather than just use the raw results, for the last 25 years the government has aimed to make the process fairer by examining the levels of progress a pupil has made whilst in the school (Kelly & Downey, 2010; Leckie & Goldstein, 2017). The assumption is that this is a fairer test of the school’s performance as a pupil making 3 levels of progress at a lower level, is awarded the same as a pupil making 3 levels of progress at a higher level. It is these progress levels that are tracked meticulously through a pupil’s time at school and ultimately published in the annual league tables (Leckie & Goldstein, 2009), used by parents and Ofsted alike to make a judgement on a school’s performance.

In 2016, the government introduced ‘Attainment’ and ‘Progress 8’ as an accountability measure (Department for Education [DfE], 2018). Attainment 8 showed the average attainment of all pupils in the school in their best 8 subjects (Ark, 2016). Progress 8, is a little more complex as it examines the progress pupils make based on their key stage 2 levels. However, not all subjects are equally weighted and not all subjects are counted, they are divided into categories (Ark, 2016):

Points are doubled for these subjects, however, for English to be doubled, both language and literature must have been sat, but only one will be double-weighted.

The best 3 will be chosen for this category.

3 of the best other subjects including:

Success is heavily weighted towards academic subjects, which is a disadvantage to lower achieving pupils more likely to sit more vocational qualifications (Burges & Thompson, 2013). Ofsted (2019) have recognised the over reliance on academic subjects and recommended a more diverse curriculum, however this is difficult when the reported measure of accountability is still biased towards academia.

Should we adjust for pupil and school background?

The government argues that Progress 8 is a fair accountability measure as it takes into account the Key Stage 2 scores rather than simple attainment, assuming that all schools, with pupils from all backgrounds will make progress at a similar trajectory. However, studies demonstrate the importance of demographic background in predicting school attainment (Teddlie & Reynolds, 2000; Reynolds et al., 2014). It has also been shown that race, gender and background can have an impact, with trends revealing that working class white boys with special educational needs, make the least amount of progress (EPI, 2017). Many therefore argue that to not adjust scores accordingly is unfair (Goldstein, 1997; OECD, 2008; Raudenbush & Willms, 1995; Reynolds et al., 2014; Teddlie & Reynolds, 2000), the effects of which are multitude:

The government have argued that adjusting performance measures according to socio-economic background simply reaffirms poor performance by lowering expectations which is why, in 2010, they withdrew measures to adjust according to background, arguing that it was ‘wrong in principle’ (DfE, 2010, p. 68, Perry, 2016). 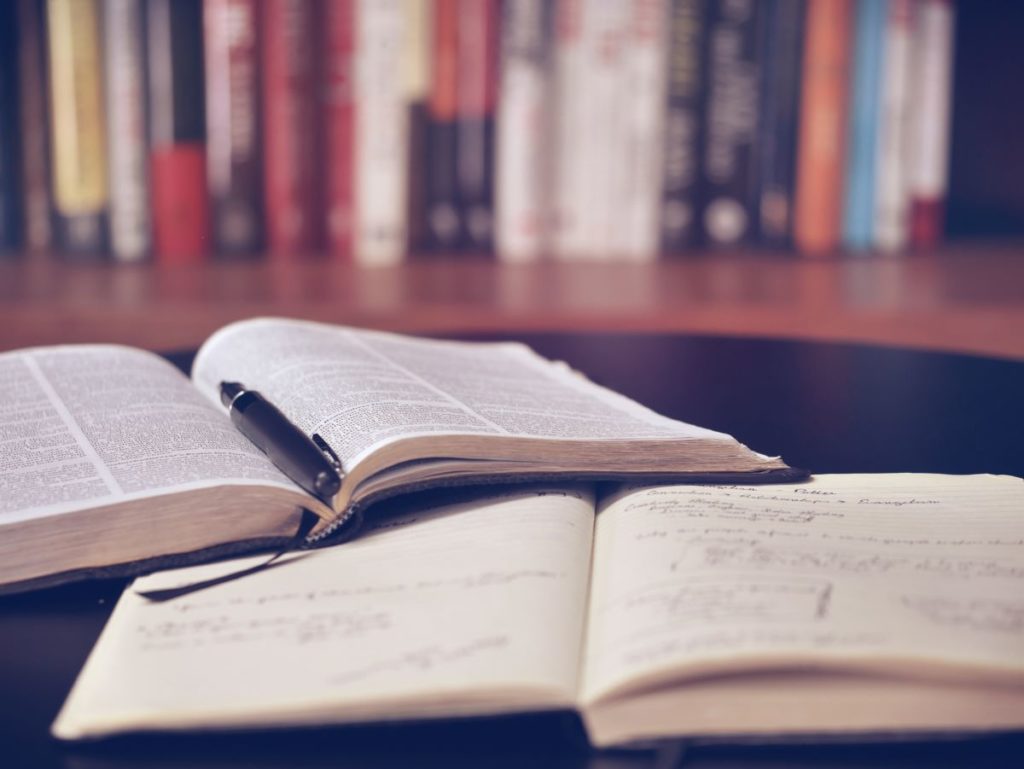 Progress 8 measures the progress of students from Key Stage 2 through to GCSE. The government argue it is fairer than publishing raw attainment scores, but critics argue there needs to be adjustment for pupil and school background.

The research looked at the Progress 8 scores of all state maintained secondary schools (Leckie & Goldstein, 2019). Information from the National Pupil Database was used to recreate the raw Attainment 8 data and Key Stage 2 scores. This information was then used to explore a range of background factors including:

The information was correlated to examine the relationship between Progress 8 scores and pupil background characteristics, before exploring what the scores would look like if adjusted accordingly.

The study revealed a number of factors that influenced the amount of progress made within secondary school:

However, when adjusting for background, a different picture starts to emerge: 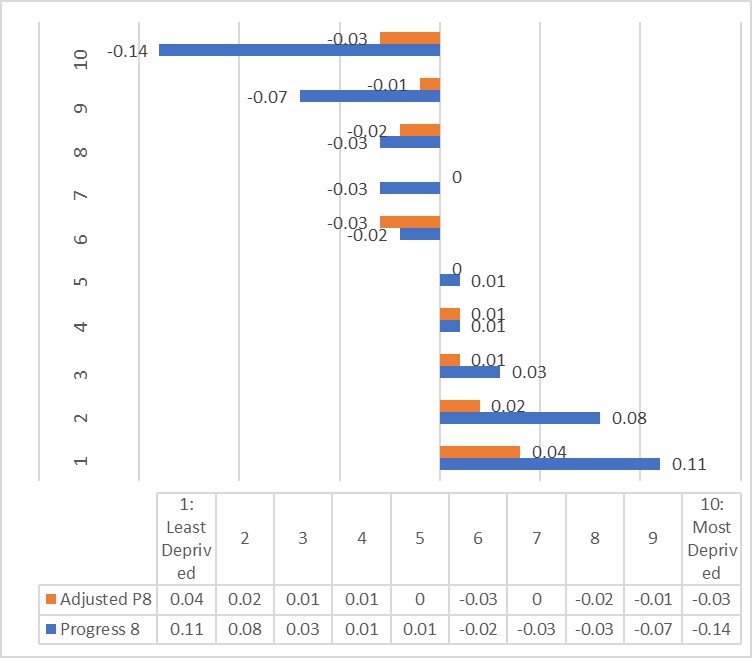 As can be seen from Table 1, schools in the most affluent areas do less well and those with the highest levels of poverty perform significantly better. When examining regions (Table 2), a similar pattern emerges, areas that are traditionally working class, such as the North East and North West perform much better under adjusted scores whilst more affluent parts of England such as London and the East of England generally show less progress than originally reported. The high ethnicity rate in London also accounts for their initial high performance as this is known to positively influence performance factors. 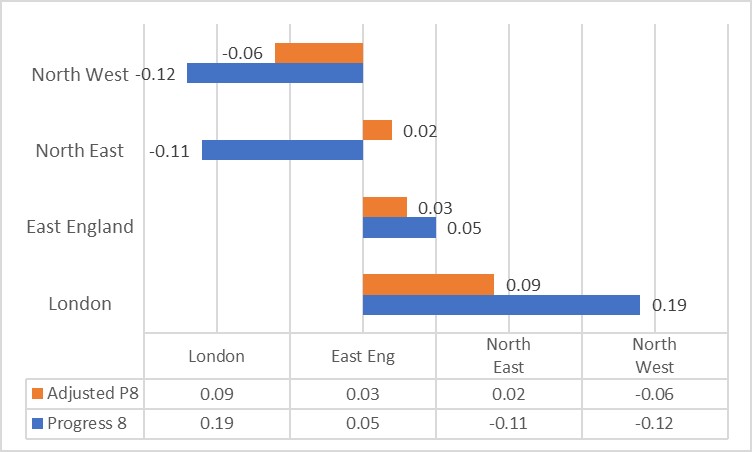 Table 2: Adjusting Progress 8 according to region.

Alongside higher levels of poverty are increased levels of health inequalities, both physical and mental, as first reported by the 1980 Black Report (Black, Morris, Smith, & Townsend, 1982) and confirmed by later reports (Marmot, 2010; Whitehead, 1988), with Public Health England reiterating that there is not just a health divide, but also an educational one with children and young people from deprived areas having poorer outcomes (H.M. Government, 2017). This is especially significant when considering attendance levels, something that will have a significant impact on progress. It also highlights the importance of having time to address both physical and mental health concerns within less advantaged areas, something not currently possible due to the need to meet the demands of progress 8. 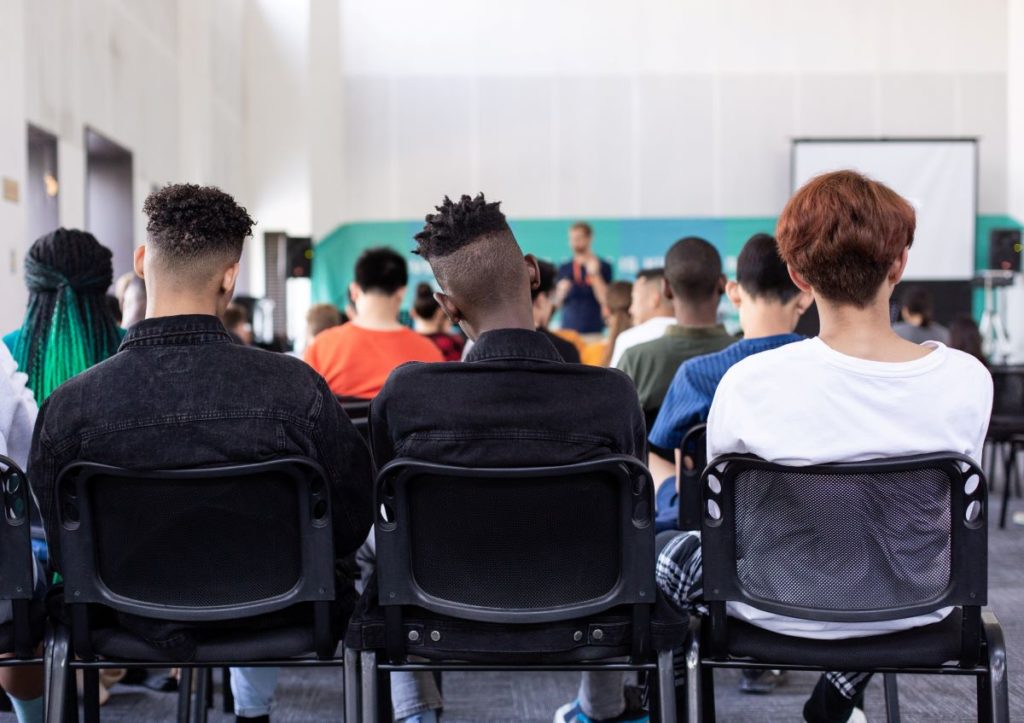 When adjusting for pupil background, schools from more affluent areas do less well, whilst those from more deprived areas do far better.

Adjusting progress 8 scores for school and pupil characteristics dramatically changes how a school is deemed to be performing. Examination of the data revealed that a third of so called ‘underperforming’ schools would no longer be within this category if scores were adjusted to reflect the pupil background.

By ignoring these factors, schools that serve such pupils are effectively punished or rewarded for the impact of societal factors, it is therefore recommended that adjusted progress 8 scores be published alongside progress 8 so that fairer conclusions of school accountability can be drawn. 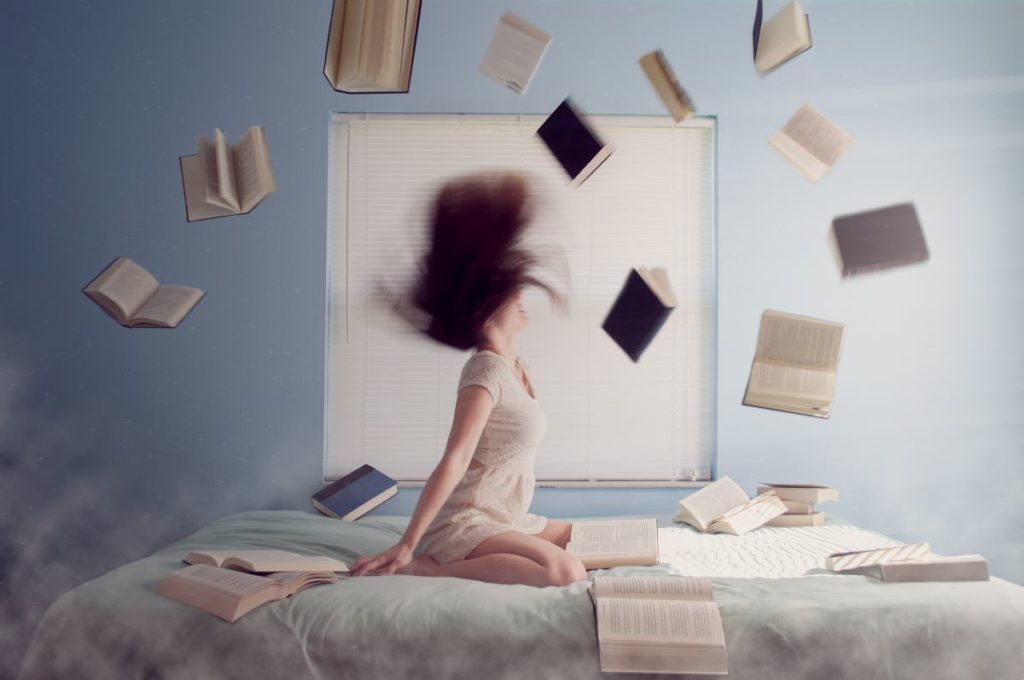 Adjusting progress 8 scores for school and pupil characteristics dramatically changes how a school is deemed to be performing.

There is general concern about the use of any measures that use high stakes testing to evaluate school accountability expressed by both academics (Amrein-Beardsley, 2014; Foley & Goldstein, 2012; Perry, 2016) and teachers (National Association for Head Teachers, 2018). Such measures:

Regardless of whether scores are adjusted or not, these issues are not addressed. There is little research to confirm the link between improved pupil learning and test measured school accountability (NFER, 2018). 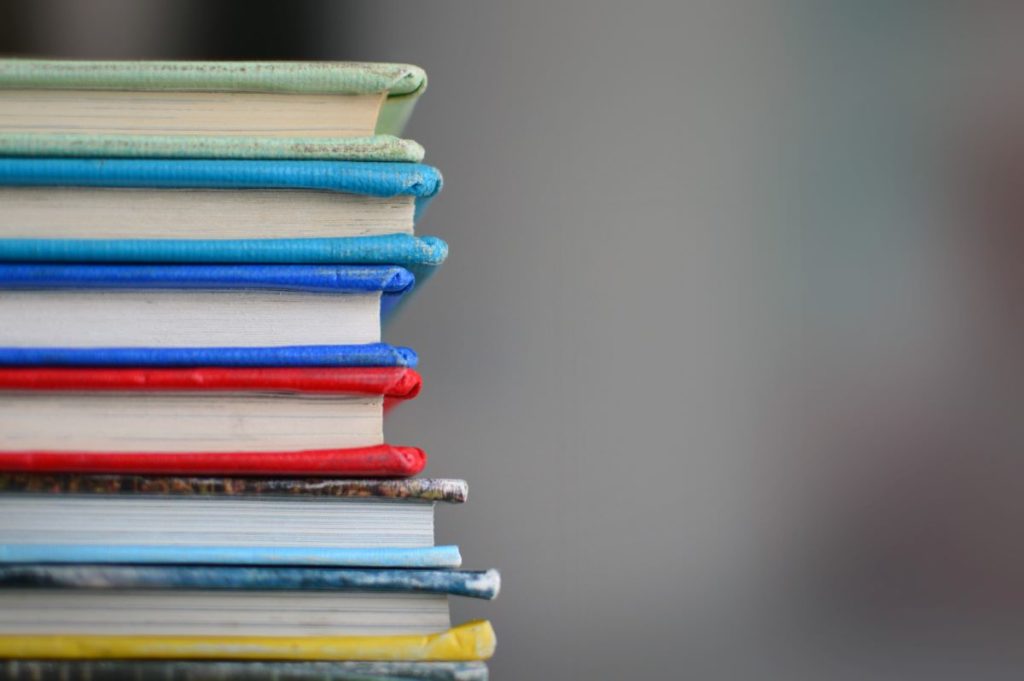 There is little research to confirm the link between improved pupil learning and test measured school accountability. 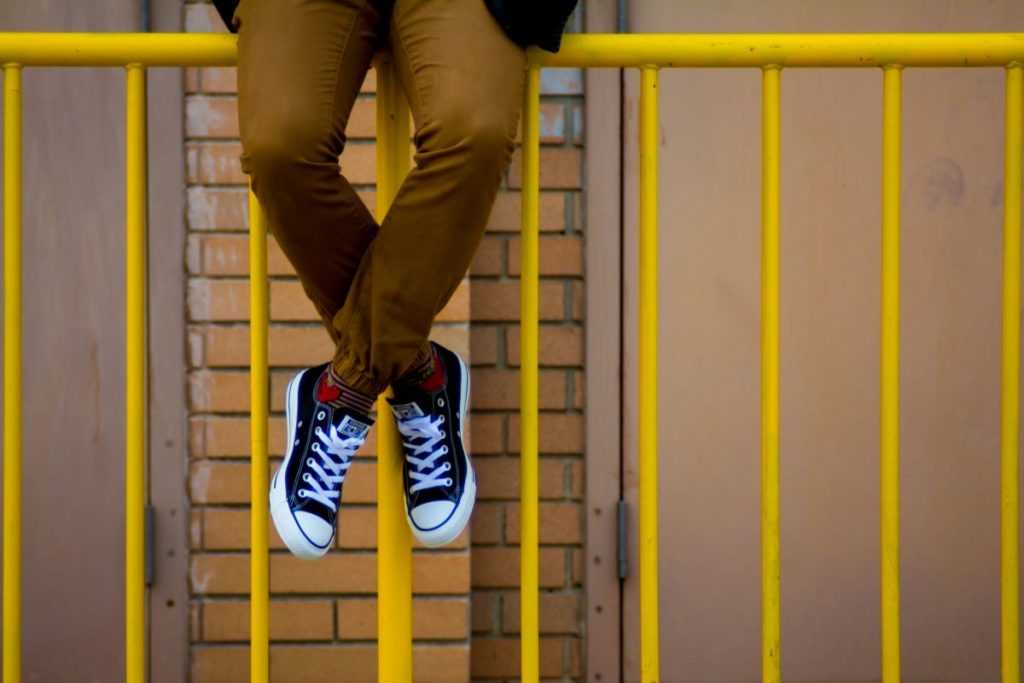 Government use of test based school accountability cannot be supported by the data or research.

Department for Education. (2010). The importance of teaching: The Schools White Paper 2010.

National Foundation for Educational Research.  (2018) What impact does accountability have on curriculum, standards and engagement in education? A literature review.