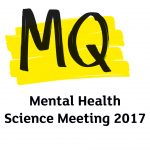 I spent two days last week in the company of some of the world’s leading mental health scientists, who had come together in London for the annual MQ Mental Health Science Meeting.

MQ is the first major charity funding scientific research to “transform the lives of everyone affected by mental illness”. Originally set up in 2013 with funding from the Wellcome Trust and the Institute of Social Psychiatry, the charity has recently launched the eye-catching #WeSwear campaign to begin the tough job of raising public money to support their vital work.

My role at the event was to take it #BeyondTheRoom with our new digital conference service, which involved 48 hours of full on live blogging, tweeting, podcasting and streaming. Today’s blog is a summary of the meeting. If you want a more detailed overview you should check out the excellent live blog written by Lucie Horton from MQ.

The first keynote talk was from Louise Arsenault, Professor of Developmental Psychology at King’s College London who mapped out the evidence that bullying is harmful for young people. Her take-home messages were:

It was a really accessible and engaging presentation that set the scene brilliantly for the next two days.

Our first symposium was chaired by Elaine Fox, Professor of Psychology & Affective Neuroscience at the University of Oxford. It featured short talks relevant to anxiety disorders from researchers who make use of very varied techniques to inform their work:

Hugo Critchley, Chair in Psychiatry at the University of Sussex presented his work on interoceptive processing as an intervention target for anxiety prevention.

Michelle Moulds, Professor from the University of New South Wales, told us about role of rumination in depression and anxiety disorders.

Chaired by Matt Jones, Reader in Cognitive Neurophysiology from the University of Bristol, this session included contributions from:

Ezra Susser, Professor of Epidemiology and Psychiatry at Columbia University, who spoke about prenatal nutritional deficiencies and neurodevelopmental disorders: where do we go from here?

Beatriz Rico, Professor of Developmental Neurobiology from King’s College London, who presented her work on assembly of inhibitory circuitries and schizophrenia.

Jonathan Mill, Professor of Epigenetics at the University of Exeter Medical School, who gave a talk on (epi)genomic pathways to mental health: genes, environment and development.

Carmen Sandi, Professor in The Brain Mind Institute at EPFL Lausanne, gave a keynote presentation on neurodevelopmental trajectories to psychopathology. Her talk illustrated the effects that our genes and life stress can have on the development of mental health conditions. She focused particularly on the mechanisms of abnormal aggression and fear learning during development.

Chaired by Francesca Happé, Director of the MRC Social, Genetic and Developmental Psychiatry Centre at King’s College London, this session featured talks by:

Edmund Sonuga-Barke, Professor of Developmental Psychology, Psychiatry and Neuroscience at King’s College London gave a talk entitled: Towards prevention neuroscience for disorders of impulse and attention.

Frances Rice, Senior Lecturer in the Division of Psychological Medicine and Clinical Neurosciences at Cardiff University spoke about the antecedents of adolescent depressive disorder and implications for prevention.

Graham Murray, Lecturer in the Department of Psychiatry at the University of Cambridge, presented his work looking at developmental neurocognitive perspectives on ADHD and schizophrenia.

Peter Jones, Professor in the School of Clinical Medicine and Department of Psychiatry at the University of Cambridge chaired the final symposium, which featured contributions from:

Myrna Weissman, Professor of Epidemiology in Psychiatry at Columbia University, gave an overview of her cross-generational work exploring risk factors for depression.

Mary Cannon, Professor at the Royal College of Surgeons in Ireland, spoke about her work looking at psychotic symptoms in young people.

Panel Discussion: What good is a diagnosis?

The conference highlight for me was the expert discussion on mental health diagnosis, which was live streamed on Facebook.

The expert panel was:

The discussion explored how a mental health diagnosis can be a help and a hindrance for people. The panellists considered alternatives to diagnostic systems like the DSM5 and ICD10, as well as touching on overdiagnosis and subsequent overtreatment.

Keynote: The social environment and the brain

The final talk came from Andreas Meyer-Lindenberg, Director of the Central Institute of Mental Health in Mannheim, who shared his work on the social environment and the brain, and the implications for preventing and treating mental disorders.

This keynote included evidence on the links between schizophrenia and urbanicity, migration and social status. A highlight for us woodland dwellers was the discussion about the impact that ‘green space’ has on the brain. Andreas’ work shows a clear relationship between walking in the countryside and ruminating less, which is likely to benefit those with depression.

Finally, we were treated to an exciting digital mental health research idea involving resilience and social networks. The project seeks to make use of RFID cardless payment chips in mobile phones to map social networks in real time.

Our #BeyondTheRoom activity was once again a big success. The social media coverage (#MQScienceMeeting) trebled the number of people contributing to the conversations and exceeded 18 million Twitter impressions for the duration of the event.

The live blogging and live podcasting was extremely well received by participants at the event and those following on social media. Podcasting conversations with speakers from the event is a great way of open up the discussion to people who can’t make it to the conference. It’s also a really effective way of capturing and publishing the less formal parts of the programme; those magical networking moments that occur at the best events.

Live streaming opens up the meeting still further and offers lots of opportunities for live democratic debate. Our Facebook live coverage of this event has already been viewed <2,000 times. 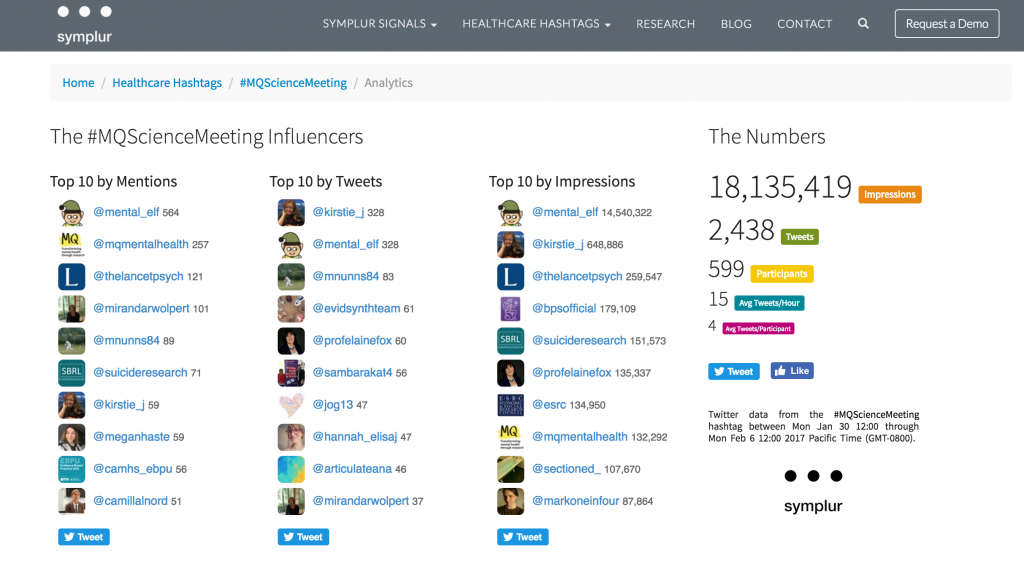 The Mental Elf presence at this event amplified the conversation by more than 400%!

So what did I take away from this meeting? If I’m honest, I arrived with quite a bit of trepidation looking at the programme, which was primarily full of basic science talks. I wondered about the real world applicability of some of the work being presented and I was slightly anxious about communicating some of the complex neuroscience to a non-expert audience on social media.

Of course, a great deal of the research being presented at this meeting has been funded by MQ, who have chosen to invest in a fair bit of “high risk, high reward” research that may have a significant impact on the lives of people with mental health conditions. Is this strategy too risky? It’s certainly an ambitious programme of work, from a relatively small number of leading research organisations. Many in the mental health research community (i.e. those championing applied or qualitative research) will disagree with this focus and may feel excluded from the programme. My podcast interview with Niall Boyce from The Lancet Psychiatry (below) touches on some of these issues and his MQ editorial from last week is well worth reading.

I have to say that I left the meeting feeling very positive about the future of mental health research. The quality of work presented at the event was extremely high and there is no doubting the commitment of the researchers present to improve the lives of people affected by mental health difficulties. The timely focus on prevention and early intervention reinforces the progressive approach that MQ have taken since day one. I was especially pleased to hear many of the speakers highlight social determinants, early life trauma, bullying and environment factors in their work, rather than simply viewing mental health disorders as detached treatable entities.

MQ are committed to driving this ambitious research agenda forward, with public funds raised through their striking #WeSwear campaign. I look forward to blogging about the published research that comes from this current crop of scientists and to playing my part in supporting the growth and reach of this exciting network.