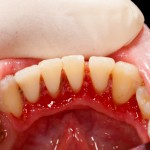 Periodontal disease are very common worldwide and while treating and controlling them is achievable reliable and consistent methods of replacing lost periodontal tissues continues to present a challenge.

the relative benefits of periodontal regeneration therapies compared to FO seemed to be maintained up to 5–10 years in terms of PPD reduction and CAL gain, although the confidence interval of the differences in treatment effects became much wider, when the time since the surgeries increased. Authors should be encouraged to report longitudinal results to provide more evidence on the long-term benefits of periodontal regeneration therapies.

This review has included a large number of studies most of which the authors consider to be at low risk of bias. However, looking at the table showing the risk of bias (RoB) scores in the supplementary data on-line only one study was considered to be at low risk for all 7 elements of the RoB scores, 14 were at high risk of bias with the 37 remaining studies all have one element at unclear risk.

While a good deal of deal about the included studies is provided in the on-line supplementary data no information is provided about the sample sizes of the included studies. Longitudinal analysis was conducted for 4 comparisons EMD versus FO; GTR versus FO; EMD versus GTR and (4) GTR + BG versus FO. And while some statistically significant differences were identified the size of these difference raise issues as to whether there are clinically important. It is also important to note that while the conclusions refers to 5- 10 year outcomes only a small number of treatment comparisons provided data at these time intervals as the vast majority were at less than 6 months or at twelve months. Consequently, the findings of this review should be viewed cautiously.