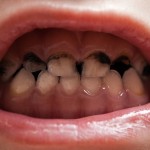 The aim of this trial was to test the use of motivational interviewing (MI) as an approach to control caries in indigenous children. This cluster-randomised trial was conducted in Cree communities in Quebec.

Cree women who recently had given birth or were between the 12th and 34th weeks of pregnancy were recruited. Mothers allocated to the test group were to attend one counseling session during pregnancy and up to 6 more sessions postnatally until their child’s second birthday. Two different MI scripts were available for pregnant and new mothers and who those whose children had experience tooth eruption. Mothers from test communities also received a “Privilege Card” to expedite dental care. Mothers in the control group only received educational pamphlets. Mothers, interveners and examiners were blinded to the allocation.

Overall, these results provide preliminary evidence that, for these young, indigenous children, an MI-style intervention has an impact on severity of caries.

Last reply was September 19, 2012
Try out our members features!