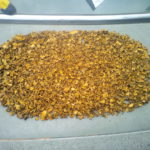 Curcumin (diferuloyl methane), demethoxycurcumin and bisdemethoxycurcumin are the main components of turmeric a member of the ginger family. Curcumin has anti-inflammatory properties and has been used as a remedy for systemic and oral inflammatory diseases. Curcumin chips and mouthwash have been used as an adjunct to scaling and root planing for the management of periodontal disease with some studies reporting effectiveness similar of better than chlorhexidine.

The aim of this review was to evaluate the effectiveness of oral curcumin products in reducing gingival inflammation and probing pocket depth in adults.

A protocol for the review was registered in PROSPERO and a typical systematic review format employed. The authors have searched two major databases identifying 27 RCTs a majority of these (19) being compared with chlorhexidine products. Studies involving gels (used topically and locally), mouthwashes, subgingival irrigation and chips were included. As well as the range of products used there was variation in the concentration of curcumin used.  Meta-analysis showed a significant reduction in probing pocket depth scores with curcumin in the local drug delivery group. All the other parameters showed no significant difference for curcumin a largely against chlorhexidine.

None of the included studies were considered to be at low risk of bias and the majority of studies are small (20-60 participants). Combined with the heterogeneity of the curcumin delivery systems and their dosage the findings should be interpreted cautiously. A previous review of curcumin mouthwashes alone also suggested anti-plaque and anti-gingivitis properties, that included 6 RCTs , five of which are included in this review. High quality well conducted, and well reported trials of curcumin should be undertaken to clarify the effectiveness and dosage of curcumin products as well as any possible adverse effects.

Curcumin mouthwashes for plaque and gingivitis