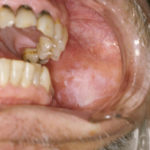 Oral cancer is one of the most common cancers in males worldwide with oral squamous cell carcinoma (OSCC) being the most frequent neoplasm of the oral cavity.  As survival rates are low early diagnosis is important and a number of chronic conditions including oral leukoplakia (OL), oral erythroplakia (OE), oral submucous fibrosis (OSMF), oral lichen planus (OLP), and actinic cheilitis (AC) may proceed OSCC and a referred to as oral potentially malignant disorders. However, the main associated factors are tobacco and alcohol use.

Searches were conducted in the Latin American and Caribbean Health Sciences (LILACS), LIVIVO, PubMed/Medline, Science Direct, Web of Science, Google Scholar, Open Gray, and ProQuest database. Observational studies in adults over the age on 18 where OPMD was clinical diagnosed and histologically confirmed were considered. Two reviewers independently selected studies and abstracted data. Risk of bias was assessed independently by 2 reviewers using the Joanna Briggs Institute Critical Appraisal Checklist for Studies Reporting Prevalence Data.  h.A random-effects meta-analysis and sensitivity analysis were conducted. The main outcome was the prevalence of OPMD expressed as a percentage.

As the authors note in their discussion the decision to focus on studies with a histological diagnosis has implications for the findings. This decision means that the data is derived from a diagnostic population-based sample rather than a broader population-based sample, with the risk of bias assessment noting that only 2 of the included studies was representative of the overall target population.  The trade-off being greater clarity on lesion diagnosis against the likelihood of overestimating the true population prevalence. The other point raised by the review authors is in relation to the differing prevalence in different geographical areas which is likely to be as a result of differing risk habits eg the use of betel quid products in South Asia.

By Photo uploaded by: dozenist. – Photo taken by Michael Gaither, and he has agreed to release this picture with the following license., CC BY-SA 3.0