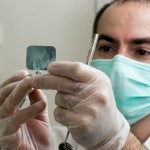 Dry socket (alveolar osteitis) is a common post-operative complication of permanent tooth extraction. Incidence of alveolar osteitis (AO) has been reported to range from 0.5-68.4%. AO may occur up to 10 times more frequently following third molar removal.

The aim of this review was to assess the effectiveness of chlorhexidine in the prevention of AO after third molar extractions.

Searches were conducted in Medline, the Cochrane Central Register of Controlled Trials, Scopus, Science-Direct, Web of Science, Evidence-Based Dentistry, ClinicalTrials.gov, the European Union Clinical Trials Register, the Spanish General University Board database of doctoral theses in Spain (TESEO), the Spanish National Research Council (CSIC) bibliographic databases, and the Spanish Medical Index (IME) without language restriction.Randomised controlled trials (RCTs) with or without placebo of chlorhexidine in any concentration, formulation, or treatment regimen for preventing AO in patients undergoing extraction of upper or lower third molars were considered.

the use of chlorhexidine in any formulation, concentration, or regimen is efficacious and effective in preventing AO in patients who have undergone third molar extractions. Chlorhexidine gel was found to be moderately more efficacious than the rinse formulation.

A 2012 Cochrane review by Daly et al (Dental Elf – 13th Dec 2012) looked at local interventions for the management of AO.  This new review has undertaken a broad database search and has included 7 new studies published since the Cochrane review. While the authors of this new review have undertaken a quality assessment it is unfortunate that they have not used the full Cochrane risk of bias tool and used the standard approach for displaying the findings as this who have helped the reader.  This review includes 4 studies excluded in the Cochrane review.  As the authors note the findings of the Cochrane review were similar to this current review with a relative risk for rinse = 0.58(95%CI; 0.43 to 0.78) and RR= 0.42 (95%CI; 0.21 to 0.87).