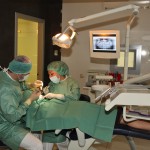 Articaine is one of the amide group of local anaesthetics. It was first prepared in 1969 under the generic name of carticaine changing to articaine in 1976. It has an intermediate duration of action with a good onset time high potency and duration. However, the possibility of hyperaesthesia  has been raised as a disadvantage.

The aim of this review was to assess the possibility of increased risk of hyperaesthesia with the use of articaine in comparison with other local anaesthetics in lower alveolar nerve block in third molar surgery.

Searches were conducted in the Medline/PubMed, Embase, Cochrane Library (CENTRAL), Web of Science, Scopus, OpenGrey, the Brazilian Web site Digital Library of Theses and Dissertations, and the Brazilian Clinical Trials Registry databases. This was supplemented by manual searches in the journals, International Journal of Oral and Maxillofacial Surgery, Journal of Oral and Maxillofacial Surgery, and Journal of Cranio-Maxillo-Facial Surgery and the reference lists of included studies.

Randomised controlled clinical trials (RCTs) comparing articaine in any concentration as a local anaesthetic associated with a vasoconstrictor (adrenaline) against other local anaesthetics for extraction of lower third molars using a lower alveolar nerve block were considered. There was no restriction on date of publication but only studies published in English, Portuguese, and Spanish were considered.

Two reviewers independently reviewed and selected studies. Data was extracted and risk of bias was assessed independently by two reviewers using the Cochrane risk of bias tool (RoB 2).  The primary outcome was the presence or the absence of hypesthesia. Relative risk (RR) was used to assess effect size and meta-analysis performed.

..this systematic review and meta-analysis suggests that the use of articaine does not increase the risk of hyperaesthesia compared with other local anaesthetics in lower third molar extraction, and when present, this complication is temporary.

Recently (Dental Elf – 8th Feb 2021) we looked at local anaesthetic solutions for the best pain control following lower third molar removal and 4% articaine performed well. It did however prompt a question from one reader via LinkedIn about the potential higher risk of paraesthesia when using articaine an issue addressed by this review.

The authors registered their protocol on the PROSPERO database and searched a broad range of databases although restricting their inclusions to those published in English, Portuguese, and Spanish may have excluded some relevant studies. Of the 13 studies included 5 (3.8%) were considered to be at low risk of bias. The number of patients in the studies ranged from 20-96 and the number of episodes of hyperaesthesia was very small, just 5 in total (0.1%). As noted by the authors hyperaesthesia following third molar extraction may not be the due to the type of anaesthetic but as a result of surgical technique and the incidence of inferior alveolar nerve paraesthesia reported during third molar surgery is reported to be in the range of 0.4- 8.4%.

A 2018 Cochrane review (Dental Elf – 18th Jul 2018) looked more broadly at the use of local anaesthetics for preventing pain during dental treatment including 123 RCTs. The findings indicated that adverse effects were rare only reporting on pain following injection.  While a recent in-vitro study (Albalawi et al. 2018) found articaine to be no more neurotoxic than lidocaine.