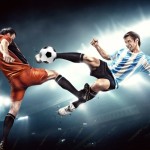 Recent studies have found evidence that oral health in professional athletes is poor and impacts on well-being, training and performance.

The aim of this study was to evaluate the oral health of a representative sample of professional footballers and to investigate possible determinants or oral health in this group as well as the self-reported impacts on well-being, quality of life and performance.

This cross-sectional study of the oral health of professional footballers suggests that their oral health is poorer than a comparable group from the Adult Dental Health Survey for England, Wales and Northern Ireland (2009).

However, as the authors note, this should be interpreted with caution as the examiners were not trained and calibrated and the methodology although similar, was not the same.  This study builds on previous work by this group looking at the oral health of elite athletes that emphasises that while oral health is as important to this population group as any other group, it may also influence their performance.