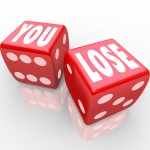 Pathological gambling is defined by DSM-IV as a disorder of impulse control which includes a preoccupation with gambling, failed attempts to reduce gambling, and restlessness or irritability when prevented from gambling. It is likely to be reclassified as an addictive disorder in DSM-V.

Gambling is something that most adults dabble in from time to time. The British Gambling Prevalence survey in 2010 reported that up to 85% of adults in Western countries said that they had gambled recreationally in the last year. It’s clearly big business and the gambling industry has responded to the explosion in online and mobile technology with the terrifying severed head of Ray Winstone leading their assault on our senses. Us elves run screaming every time he pops up during the football.

Various studies have estimated the prevalence of pathological gambling, with the numbers varying from 0.2% in Norway to 5.3% in Hong Kong.

A new review from the Cochrane Depression, Anxiety and Neurosis Group synthesises the evidence from randomised controlled trials (RCTs) to bring us the best summary of psychological therapies for pathological and problem gambling to date.

The reviewers conducted the usual robust literature search and identified 14 RCTs including a total of 1,245 patients. The overall quality of the evidence found was low to very low (using the GRADE criteria), but the trials were similar enough to be combined in a meta-analysis.

The low quality of these pooled studies may mean that the treatment effect is overestimated in this review. These interventions look promising, but more large scale randomised controlled trials are needed in this area before we can reliably conclude that these talking treatments are effective for pathological gamblers.