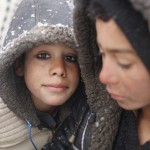 It’s consistently found that rates of PTSD and other mental health problems are high amongst refugees (Bogic et al, 2012). The trauma and disruption involved is especially problematic for children because it effects things like schooling and social development that has a disproportionate impact later on (Viner and Ozer, 2012). Unsurprisingly access to mental health services for refugee and asylum seeking children is poor (Reed et al, 2012, Folkes, 2002).

Despite a clear need for mental health services amongst refugee and asylum seeking children, there’s little known about which models and strategies are most effective. Tyrer and Fazel at the University of Oxford set out to review relevant interventions that had been evaluated in schools, community and in refugee camps.

A comprehensive search of electronic databases and contact with experts combined with strict inclusion criteria allowed them to whittle down 21 studies from 1,716. These 21 studies included a total of about 1,800 children.

The quality assessment using the Yates scale showed some variation: 4 fulfilled the quality criteria, 10 partially so and 7 didn’t fulfil it. For example, only 6 of the studies had data on rates of retention, and minimising of biases was only reported in 18 of the studies. The quality of the interventions varied as well: fulfilled (7 studies); partially fulfilled (8); not fulfilled (6).

The authors are frank about this variation in quality and it also makes clear why a meta analysis wasn’t possible. In many ways, the landscape of publications reflects the diversity of the population and contexts being considered. There was a large variation in the type and quality of studies featured in this review.

The variation amongst the studies is a finding in itself. Here’s a more detailed breakdown:

Having found that there’s a mix of studies out there, what about the actual effectiveness of these studies?

Seven of the studies reported enough data for the authors to calculate effect sizes using Cohen’s d. This showed:

Although the authors tried to make comparisons across the studies using Cohen’s effect size, the result doesn’t convince me of the superiority of one type of treatment over another. The variation in studies also makes it hard to compare interventions against each other. To find out more about the problem of comparing psychotherapies, try reading Sammy Man’s blog from January 2014. Comparing apples, oranges and pears. Most of the studies showed good results but it’s hard to make meaningful comparisons.

In study abstract reports that:

Only a small number of studies fulfilled inclusion criteria and the majority of these were in the school setting. The findings suggest that interventions delivered within the school setting can be successful in helping children overcome difficulties associated with forced migration.

I like to think I work with a diverse range of people, but really all these people are supported by a homogenous and fairly stable political system (even one that’s a tad unfair…). It’s therefore easy for me to take comfort in the validity of NICE guidelines for those I work with. However, in a context as diverse, dynamic and unpredictable as political unrest and epidemics, perhaps interventions become meaningless when taken away from the individual context in which they were devised. Can models and strategies for interventions meaningfully be applied across diverse settings and populations?

Last reply was March 2, 2015
Try out our members features!