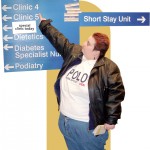 Researchers in this Canadian study looked at the factors associated with the use of psychiatric emergency services by people with learning disabilities who were living with their family. They conducted an audit of hospital chart audits for a sample of 20 such individuals with learning disabilities who had visited the emergency department (ED) at the hospital for a psychiatric crisis. They found that the 20 individuals had a combined total of 44 emergency department visits. Seven of the twenty had made more than 1 visit, with 3 people having visited the emergency department more than 5 times over a 1-year period. Of those that had been to the ED, received psychiatric consults were given 64% of the time. Nineteen visits resulted in inpatient admission, but remarkably, for over a quarter of the time, staff at the ED sent patients home with no recorded follow-up plans. The researchers found that the key difference in terms of patient characteristic or crisis severity between hospitalised and non-hospitalised visits was a greater likelihood of physical aggression which resulted in visits to the ED ending in admission. The authors consider the need for additional training for ED staff and discuss the additional community resources to support individuals and their families that might be needed to reduce the need for ED visits. Emergency Psychiatric Service Use by Individuals With Intellectual Disabilities Living With Family, Lunsky Y et al, in Journal of Mental Health Research in Intellectual Disabilities, 4, 3, 172-185