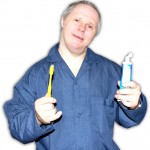 Studies have suggested that people with learning disabilities have poorer oral health than those in the general population, and often have untreated caries and high prevalence of gingivitis and other periodontal diseases.

The researchers in this study were interested in the oral health status and behaviour of people with learning disabilities who were employed as there are few studies that have looked exclusively at this group.

They worked with 64 men who were living in community settings (mean age 34 years). The team examined them to assess dental caries, oral hygiene and periodontal status. In order to understand more about the background of the men, they also collected socio-demographic, behavioural and general health data by carrying out interviews with the men and their parents.

They found that most of the workers had mild or moderate learning disabilities. They also found that the younger men, or those from higher socioeconomic groups, had significantly lower dental caries.

Concerning periodontal health, 1.6% of the men had healthy periodontium (tissues that surround and support the  teeth); 38.1% had bleeding on probing, 44.4% calculus or tartar, 12.7% shallow pockets (where tooth and gum meet) and 3.2% deep pockets. 64.5% had good oral hygiene status.

Information from parental interviews suggested that only 32.1% had had professional fluoride treatment. Nearly half also said they believed general dentists to be reluctant to provide care for people with learning disabilities.

The authors conclude that employed adults with learning disabilities had poor periodontal health and a low level of restorative care, but their findings suggested that had an acceptable oral hygiene status.