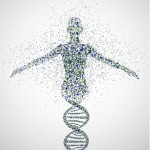 Schizophrenia is perhaps the most contentious mental health problem: its biological basis has been denied, and the validity of the diagnosis itself questioned.

However, a recent paper by the Schizophrenia Working Group of the Psychiatric Genomics Consortium provides the best evidence yet that there is a genetic basis to schizophrenia.

In a large genome-wide association study (GWAS), almost 10 million genetic variants were tested to see if they were associated with schizophrenia.

GWAS has proved to be a remarkably successful technique, identifying numerous genetic variants associated with a variety of anthropometric and disease traits. However, until recently, progress has been limited for psychiatric conditions. Genome-wide association studies investigate common genetic variants (typically those that occur with 5% frequency or greater) across the entire genome, looking for evidence that specific variants correlate with the trait or disease of interest.

The authors collected data from 49 ancestry-matched, non-overlapping case-control samples (comprising 34,241 people with schizophrenia and 45,604 controls), and 3 family-based samples (comprising 1,235 parent and affected-offspring trios). These together comprised the primary data set.

Genome-wide association data were available for all contributing samples, imputed using the 1000 Genomes Project reference panel. After applying various quality control procedures, this meant that 9.5 million genetic variants across the genome were tested for association with schizophrenia case status.

For the subset of linkage-disequilibrium independent (i.e., uncorrelated) single nucleotide polymorphisms (SNPs) with a P-value less than 1 × 10-6, the primary data set was augmented by a further 1,513 cases and 66,236 controls from deCODE genetics, and the results combined.

In the final combined analysis of 36,869 cases and 113,075 controls, 128 uncorrelated SNPs exceeded genome wide significance (i.e., a P-value smaller than 5 × 10-8). Of these, 108 represented physically distinct loci (i.e., not within close proximity to each other on the genome).

Most excitingly, 83 of these 108 associated loci had not been previously implicated in schizophrenia. The authors argue that these associations might therefore provide novel insights into the aetiology of the disease, and potentially lead to new treatments for schizophrenia.

Some of the genes implicated confirm what was already known or suspected. For example, the identification of a variant in the dopamine D2 receptor gene is consistent with the evidence that antipsychotic drugs that block these receptors are effective for treating schizophrenia.

Other findings were more surprising. For example, a number of associations are in regions involved in acquired immunity. This raises the possibility that schizophrenia might be in part a disorder of acquired immunity, although this is certainly not definitive evidence. These studies cannot tell us how these associations arise, but can point to novel biological targets worthy of further investigation. For example, in the recent study of schizophrenia, several genes involved in the immune system are implicated.

The study is remarkable because the number of loci identified, and the proportion of variation explained, is comparable with traits such as height and body mass index. The contribution of each individual genetic variant is tiny, but the cumulative effect is substantial. It’s worth noting that there is considerable genetic overlap between schizophrenia and other psychiatric conditions, suggesting that some genetic associations may not be specific to schizophrenia.

Genetic studies can provide clues as to the underlying mechanisms of disease, but how variations in genes impact on biological functions to increase schizophrenia risk cannot be answered by genetics alone. More work will be required to answer these questions. Genetic studies also don’t rule out an important role for the environment. GWAS might even help identify other causes of disease, by identifying loci associated with, for example, tobacco use. Genome-wide association studies have proved extremely successful in identifying reliable genetic associations with a number of disease outcomes, but until now studies of psychiatric outcomes have lagged behind. This latest schizophrenia study is therefore an important advance.

This is a ground-breaking study which demonstrates the advances that can be made by sharing data on a large-scale, via international consortia. It is too early to say if and how these findings will translate into clinical applications (it will be several years before we know this) but our understanding of schizophrenia has certainly taken a major step forward.

Last reply was January 31, 2018
Try out our members features!