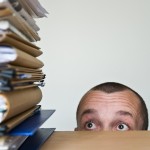 Mental health in the workplace is an area that we’ve blogged about a few times before. This blog features a recent review by Tan et al on workplace interventions for depression.

Mental disorders are the leading cause of sickness absence (Harvey, 2009 and Henderson, 2011), and depression in particular is predicted to be the leading cause of work disability by 2020 (Mathers, 2006). The significance of work to our mental health isn’t surprising considering we spend an average of 60% of our waking hours at work (WHO, 2008).

Although it is often said that prevention is better than cure, most workplace interventions are implemented reactively when an employee is already ill and on costly sick-leave. However, research on mental health interventions suggests they can result in a favourable return on investment (Hamberg-van Reenen, 2012). Employers may then be interested to see if preventative interventions result in a happier and more productive workforce.

Tan et al set out to systematically review and undertake a meta-analysis of randomised controlled trials (RCTs) of workplace prevention of depression. They were particularly interested in those programmes aimed at the universal workforce, not just those individuals at greater risk of depression. An extensive search of electronic databases identified 17 RCTs of which nine were assessed to be of fair quality. For inclusion the studies needed to involve comparing a treatment group with a control group. Outcomes had to be measured using standardised self-report questionnaires both before and after intervention. The interventions needed to be aimed at the universal workforce, not just those at risk for depression. They also had to have a follow up period of at least four weeks.

The studies featured a range of interventions:

Tan et al represented the effect size through standardised mean difference (SMD) that compares the outcome measures of depression in the treatment and control group after the intervention. CBT came out best overall, but did this review cut the mustard?

However, there are several limitations to the research that makes us think the authors’ conclusion is too optimistic.

It’s worth noting that two of the authors work for an organisation that actually provides mental health training for workplaces (the Black Dog Institute in Australia). It is possible that this affiliation encouraged the authors to be overly optimistic about the benefits of workplace interventions.

In summary, Tan et al have shown that workplace interventions are associated with small reductions in depressive symptoms. However, their conclusions could be more cautious. More research is needed to understand what specific factors are most beneficial to employees’ symptom scores and whether interventions can prevent full-blown mental health disorders.

Tomlin, A. MoodGym no better than informational websites, according to new workplace RCT. The Mental Elf, 20 Sep 2012.

Tomlin, A. Making workplace adjustments for people with mental health problems: new guidance from the Department of Health. The Mental Elf,  13 Sep 2012.

Tomlin, A. Women who work long hours are at risk of depression and anxiety. The Mental Elf, 13 Jul 2012.