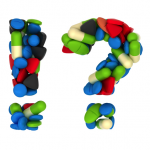 Depression is common in primary care and associated with a substantial personal, social and societal burden. There is considerable ongoing controversy regarding whether antidepressant pharmacotherapy works and, in particular, for whom. One widely-prescribed antidepressant is fluoxetine (Prozac), an antidepressant of the selective serotonin reuptake inhibitors (SSRI) class. Although a number of more recent antidepressants are available, fluoxetine (which went off patent in 2001) remains highly popular and is commonly prescribed.

This systematic review and meta-analysis, published through the Cochrane Collaboration, compares the effects of fluoxetine for depression, compared with other SSRIs, tricyclic antidepressants (TCAs), selective noradrenaline reuptake inhibitors (SNRIs), monoamine oxidase inhibitors (MAOIs) and newer agents, as well as other conventional and unconventional agents. This is an important clinical question – different antidepressants have different efficacy and side effect profiles, but direct comparisons are relatively rare. Thank goodness for systematic reviewers who read hundreds of papers and combine the results, so you don’t have to

The review focused on studies of adults with unipolar major depressive disorder (regardless of the specific diagnostic criteria used), searching major databases for studies published up to 11 May 2012.

All randomised controlled trials comparing fluoxetine with any other antidepressant (including non-conventional agents such as hypericum, also known as St John’s wort) were included. Both dichotomous (reduction of at least 50% on the Hamilton Depression Scale) and continuous (mean scores at the end of the trial or change score on depression measures) outcomes were considered.

Moreover, the majority of studies failed to report detail on methodological procedures, and most were sponsored by pharmaceutical companies.

Both factors increase the risk of bias and overestimation of treatment effects. No definitive implications can be drawn from the studies’ results.

There was some evidence for greater efficacy of sertraline and venlafaxine over fluoxetine, which may be clinically meaningful, but other considerations such as side-effect profile, patient acceptability and cost will also have a bearing on treatment decisions.

In other words, despite considerable effort and pooling all of the available evidence, we still can’t be certain whether one antidepressant is superior to another.

What this review really highlights is the ongoing difficulty in establishing whether some drugs are genuinely effective (and safe), because of publication bias against null results (Turner, 2008).

This situation is made worse when there are financial vested interests involved. Recently, there has been active discussion about how this problem can be resolved, for example by requiring pharmaceutical companies to release all data from clinical trials they conduct, irrespective of the nature of the findings. Despite the mountains of trials published in this field, we still cannot say for sure which treatments work best for depression

Clinical decision making regarding the most appropriate medication to prescribe are complex, and made harder by the lack of direct comparisons. Moreover, the apparent efficacy of individual treatments may be inflated by publication bias. Direct comparisons between different treatments are therefore important, but remain relatively rare. This Cochrane Review provides very important information, even if only by highlighting how much we still don’t know about which treatments work best.

Etchells, P. We don’t know if antidepressants work, so stop bashing them. The Guardian website, 15 Aug 2013.