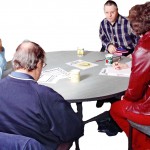 Whilst there is no evidence that dementia affects people with learning disabilities in ways that are different to those without learning disability, there is a risk that the early stages of the disease may be missed or misinterpreted. People with Down syndrome may present with clinical symptoms in their late 40s or early 50s. Estimates from the Alzheimers’s society suggest that prevalence rates for dementia in Down syndrome rise from around 2% between ages 30 and 39 to around 36% between ages 50-59.

The researchers in this study were concerned by the high prevalence of dementia in their locality in the north West of England (Hyndburn and Ribble Valley) and set up a screening service in response.

The authors reflect on the process after twelve months of operation. The screening service consists of a multi-disciplinary team consisting of members from the learning disability service and the Older Adults Psychiatry service. The team has developed and implemented screening care pathways.

In addition to routine screening assessments, the team also provides interventions where there are concerns about dementia expressed and also designs and delivers for staff.

During the first 12 months, 27 service users received screening assessments with six having been identified as at moderate to high risk of developing dementia.

The setting up of the service has enabled a deeper reflection on the issues and highlighted concerns for broader consideration throughout the service development process,.

The training provided by the team has been evaluated in the first year and the early results showed this to be effective in increasing carers’ understanding of the issues in dementia and learning disabilities.

The researchers point out that this is an early evaluation of the work of the team, but suggest that early signs are promising and make suggestions for future development.

Reflections upon the development of a dementia screening service for individuals with Down’s syndrome across the Hyndburn and Ribble Valley Area, Cairns V et al, in British Journal of Learning Disabilities, 39: 198–208.

Last reply was September 30, 2011
Try out our members features!