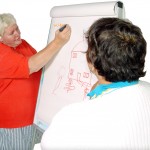 Acceptance and Commitment Therapy (ACT – pronounced as the word rather than the initials) is based on the notion that it is important to accept what is out of your personal control but commit to action to improve and enrich your life. ACT is an approach which sets out to teach psychological skills to deal with painful thoughts and feelings so they have much less impact and influence and by helping people to identify what is truly important and meaningful so that these things can help to change life for the better.

The authors of this study were interested in the application of these principles to occupational stress. Following a pilot study which suggested such an approach may be helpful to staff working with people with learning disabilities, they set out to train a group of ‘ACT novices’, recruited from the workforce, to deliver training to others.

They worked with 72 staff in specialist challenging behaviour services who attended one of six workshops which consisted of one day and a half-day follow-up six weeks later. In order to evaluate the impact of the intervention, they took a range of measurements from those staff at five time points, including two baseline, one post-intervention and two follow-up measures.

They conclude that their findings are similar to those of previous studies, but suggest that

complete support for an ACT model was not demonstrated which provides opportunities for further research in the field.

Outcomes of a ‘Train the Trainers’ approach to an acceptance based stress intervention in a specialist challenging behaviour service Smith, M & Gore N in International Journal of Positive Behavioural Support, 2, 1, 39-48