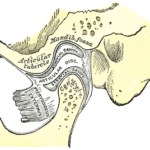 Temporomandibular joint (TMJ) arthralgia is a painful condition that is often managed with local measure such as occlusal splints, manipulation of the mandible and jaw exercise. Nonsteroidal analgesia and other conventional analgesics are also commonly used although for persistent pain intra-articular injection of corticosteroids can be used. While corticosteroids have been used the need for more primary studies has been highlighted.

The aim of this study was to assess the efficacy of a single-dose intra-articular injection of methylprednisolone to reduce TMJ pain.

Patients aged 18 or older who had been diagnosed with unilateral TMJ arthralgia were randomised to receive either a single 1 mL IA injection of either methylprednisolone 40mg/mL) or saline following an auriculotemporal nerve block with 1.8 mL of prilocaine- felypressin 30 + 0.54 mg/mL. Patients were prescribed rescue analgesia recording usage in the diary provided.

The primary outcome measure was change in visual analogue scale (VAS)-rated pain at maximum opening.  Baseline assessments was undertaken immediately prior to the intervention and at 4 weeks.  The 20-item global Jaw Functional Limitation Scale (JFLS- 20), and the Patient Health Questionnaire-9 (PHQ-9) were also administered at both time points. Patients also Participants rated the change in their overall status since beginning the study treatment using the Patient Global Impression of Change (PGIC

our findings show that methylprednisolone was not superior to saline for reducing TMJ arthralgia pain. On the contrary, methylprednisolone caused greater pain compared with saline following the intervention. The combination of a nerve block with local anaesthetics and an IA deposition of saline provided substantial improvements in pain. The mechanism behind this phenomenon requires further evaluation.

While this trial is been well conducted and reported it may be lacking in power.  The power calculation was based on the assumption of 15-mm VAS as a clinically meaningful difference with a requirement to recruit 32 patients per group. Despite a prolonged recruitment period Dec 2013 to Feb 2017 only 27 patients per arm could be recruited. further studies are required to confirm these findings.