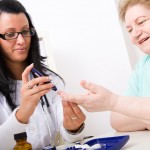 Many have suggested a two-way relationship between periodontitis and  diabetes mellitus. Poor glycaemic control is associated with an increase risk of periodontal disease and in 2010 a Cochrane review  (Simpson et al) estimated a 0.4% reduction of HbA1c associated with periodontal treatment.  At that time Simpson et al noted that there were only a small number of studies available and these lacked the power to detect a significant effect.  With the publication of additional studies the aim of this review was to evaluate whether non-surgical periodontal treatment can reduce the HbA1c% level in type 2 diabetic patients.

The Cochrane CENTRAL, Medline and Embase databases were searched together with the reference lists of identified publications. Only randomised controlled trial were included if the study population was type 2 diabetic patients (≥16 years old) diagnosed with periodontitis, and compared HbA1c% change with or without non-surgical periodontal treatment for at least three months of the study duration. Four reviewers conducted study selection independently and study quality was assessed on random sequence generation; allocation concealment; addressing incomplete outcome data; blinding; and intention-to-treat analysis.

This meta-analysis found there was a small beneficial effect of non-surgical periodontal treatment in glycaemic control. However, the effect of adjunctive antibiotic usage in this association remained inconclusive to date.

In order to understand the potential of this treatment to improve glycaemic control among people with diabetes, larger, carefully conducted and reported studies are needed.