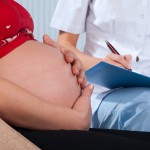 Hormonal changes during pregnancy are considered to affect the response of the gingival tissues, with studies suggesting that  36% – 100%  of pregnant women suffer pregnancy gingivitis.  The aim of this review was to assess the effect of pregnancy on systemically healthy women in terms of gingival inflammation.

Prospective cohort or cross-sectional studies assessing the effect of pregnancy on periodontal health in English were considered.  Screening and data abstraction was conducted independently by two reviewers with quality being assessed using the Newcastle-Ottawa scale. The main outcome variable was gingival inflammation, evaluated by gingival index (GI) or bleeding on probing (BOP).

Despite the limited number of studies included in the meta-analyses, the present systematic review confirms the existence of a significant increase in GI throughout pregnancy and between pregnant versus postpartum or non-pregnant women, without a concomitant increase in plaque levels.

The authors highlight a number of potential issues with this review that should be taken into consideration.  The inclusion of different study designs, the variable periodontal criteria across the studies and the fact that some study data was missing, only presented graphically so they could not be included in the meta-analyses.  In addition the authors have only included English language studies so there are likely to be additional relevant studies that could have been included.