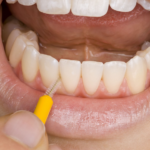 While regular twice daily toothbrushing with a fluoride toothpaste is the cornerstone of an effective oral hygiene regimens interdental cleaning is also an important aspect and a wide range of devices are marketed for this purpose, including dental floss, interdental brushes, water jet devices, toothpicks, and other devices. Although evidence regarding the most effective method is equivocal and few direct comparisons have been undertaken.

The aim of this review was to assess the comparative efficacy of interproximal oral hygiene (IOH) aids using a using Bayesian Network Meta-Analysis.

Searches were conducted in the Medline, Embase, Web of Science databases supplemented with searches of the journals; Journal of Periodontology, Journal of Clinical Periodontology, The International Journal of Periodontics and Restorative Dentistry, and International Journal of Dental Hygiene. Randomised controlled trials (RCTs) assessing IOH aids and reporting outcome measuring gingival inflammation, plaque, or probing depth and with a minimum of 2 weeks follow up were considered.

our network meta-analysis demonstrated that unsupervised flossing does not yield substantial reduction in gingival inflammation. Among 10 IOH aids, interdental brushes and water-jets ranked high among other aids for reducing gingival bleeding. Selection of a single IOH aid as the gold standard is not possible based on existing data as their effectiveness depends on ease of use, appropriate instruction and interdental anatomy and periodontal status. Most importantly, the patient-perceived benefit of the IOH aids is not clear because most studies investigated disease-oriented outcomes of gingival health, providing only limited information what matters to patients. In the absence of strong evidence about IOH aids differences in the impact on patients, practitioners should customize IOH aid recommendations and offer alternatives rather than insisting on instruction on the use of a universally recommended cleaning aid. Further well designed and appropriately powered clinical trials are warranted to provide more authoritative guidelines on IOH selection

The current review used a NMA approach which allows for indirect comparisons. However, it should be noted that only 4 of the included studies were considered to have a low risk of bias and none of the studies were long term. Looking at the network plots for two of the main outcomes reported gingival inflammation and bleeding on probing many of the indirect comparisons only involved single studies. So while this review found that interdental brushes and water-jets produced the greatest improvement in gingival inflammation the supporting evidence is of low quality and this needs to be taken into consideration when interpreting the findings.

Only low quality evidence available for effectiveness of interdental toothbrushes