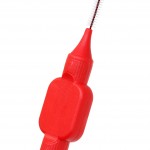 Good oral hygiene to ensure the effective removal of dental plaque is key to maintaining good oral health.  While toothbrushing is the most commonly used method, dental floss and interdental brushes are both widely available and recommended adjuncts to toothbrushing.  A 2011 Cochrane review by Sambunjak et al assessed the evidence for dental floss (Dental Elf 12th  Dec 2011) and this new review considers the effects of interdental brushing in addition to toothbrushing, as compared with toothbrushing alone or toothbrushing and flossing for the prevention and control of periodontal diseases, dental plaque and dental caries.

The usual robust Cochrane methodological approaches were taken and a wide selection of databases were searched  [Cochrane Oral Health Group’s Trials Register,  the Cochrane Central Register of Controlled Trials (CENTRAL), Medline, Embase, CINAHL), LILACS, ZETOC Conference Proceedings and the Web of Science Conference Proceedings, US National Institutes of Health Trials Register and the metaRegister of Controlled Trials] with no restrictions on the language or date of publication.