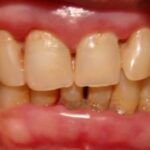 Good plaque control together with removal of supra and subgingival plaque and calculus are important elements in the successful treatment of periodontal disease. Nonsurgical treatment usually involves subgingival scaling and root planing, however, this may not remove all the calculus. Consequently, access flaps were introduced to improve the efficiency by providing direct access the root surface.

The main aim of this review was to compare access flaps and subgingival debridement in achieving probing depth reduction. A secondary aim was to assess the impact of different flap designs.

While three major databases were searched for this review restricting inclusions to publications in English may have excluded some relevant studies.  With the exception of 1 study which was conducted in private practice all the included studies were conducted in a university setting. In addition, in most studies the subgingival debridement was performed as part of the initial therapy and repeated in the assigned quadrant after randomisation and all the included studies included a strict maintenance protocol, which varied from intervals between every 2 weeks to every 6 months, including or not subgingival instrumentation.  While the results demonstrated a statistically significant improvement in PD reduction between AF and subgingival debridement this may not be clinically important.  It is also worth noting that with the exception of 4 studies that investigated pain and hypersensitivity no patient reported outcomes were assessed.