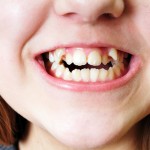 The effect of malocclusion on oral health, caries, periodontal disease, and oral health reported quality of life has been considered in many studies although findings are inconsistent.

The aim of this review was to determine the association between malocclusion and the severity of dental caries among children and adolescents in the permanent dentition.

Searches were conducted in the Cochrane Library, Medline, Scopus, Web of Science and Google Scholar databases. Observational studies assessing the association between malocclusion assessed using the Dental Aesthetic Index (DAI) and decayed missing and filled teeth (DMFT) were considered. Two reviewers independently selected studies and extracted data. The Newcastle-Ottawa tool adapted for cross-sectional studies was used to assess study quality and the GRADE approach to assess the certainty of the evidence. Meta-analysis was used to assess the association among different categories of malocclusion with dental caries.

The authors have searched a good range of databases to identify paper. Inclusions have been restricted to only those studies using the Dental Aesthetic Index (DAI) to classify malocclusion and while the DAI index is a endorsed by the WHO as a tool for screening and epidemiology its use is not extensive as indicated by the small number of studies initially screened as eligible. All of the included studies are cross-sectional with all 5 accounting for age but only two accounting for socio-economic status. A majority of the studies were conducted in India with no studies being included from high- income countries so the findings may be more applicable to developing countries. While the findings suggest an association between malocclusion and caries that demonstrates a dose-response relationship the cross-sectional nature of the included studies, limited number of confounders assessed and potentially restrictive nature of the inclusion criteria means that the findings should be viewed very cautiously.

Last reply was September 13, 2021
Try out our members features!