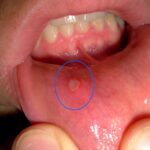 Recurrent aphthous stomatitis (RAS) or recurrent aphthous ulcers are common with the 2012 Cochrane review (Dental Elf – 14th Sep 2012) reporting prevalence estimates ranging from 5-60%. Three forms are recognised minor, major and herpetiform with a peak age of onset of 10-19 years of age although they can persist into adulthood. Their aetiology and pathogenesis is not fully understood and treatments are mainly symptomatic with the main objectives being, relieve of pain, promoting lesion healing and increasing the interval period. Topical medication, laser, cryotherapy and cautery are considered to be effective topical treatments

The aim of this review was to compare the efficacy and safety of topical interventions used for recurrent aphthous stomatitis.

A review protocol was registered with PROSPERO. Searches were conducted in the Cochrane Central Register of Controlled Trials (CENTRAL), PubMed, Embase and the Web of Science. Randomised controlled trials (RCTs) of local interventions in patients with a confirmed diagnosis of RAS were considered. Main outcomes were clinical efficacy assessed as ulcer size reduction, symptom reduction and time to healing and safety. Two reviewers screened and selected studies and extracted data. Study quality was assessed using the Cochrane domain-based approach. Standard pairwise and network meta-analysis were conducted.  Risk difference (RD)with 95% confidence intervals (CI) was used for dichotomous variables and mean difference (MD) with 95%CI for continuous variables

most of the local interventions did not show significant differences in the efficacy evaluation and safety evaluation. Based on the currently available evidence, we recommend the use of laser as a short-term intervention to promote healing and reduce pain during the exacerbation phase of RAS and probiotics as a long-term intervention to prolong the inter-episode period and reduce recurrence during the exacerbation and remission phases of RAS. We call for more large-scale RCTs based on trustworthy standards.

10 years have now elapsed since a Cochrane review looked at systemic treatment for recurrent aphthous stomatitis (Dental Elf – 14th Sep 2012) and since then this blog has looked at a number of other reviews of specific topical and systemic interventions (Dental Elf RAS blogs). This new review had a protocol published on the PROSPERO database and searched a good range of databases for RCTs of topical treatments for RAS.  The reviewers identified 72 studies examining some 29 interventions , including placebo, allicin, aloe, amlexanox, benzydamine, berberine gelatin, chitosan chlorhexidine, clobetasol, cryotherapy, curcumin, dexamethasone, diosmectite, doxycycline, glycyrrhiza, honey, insulin-liposomal gel, laser, minocycline, N-acetylcysteine, penicillin, probiotics, prostaglandin E2, quercetin, silver nitrate, sucralfate, triamcinolone, triester glycerol oxide and zinc.  Of the 72 studies 23 were assessed as being at high risk of bias and only 4 at low risk with the remainder being at unclear risk. A number of the interventions were only tested in single RCTs and there is variation in the format, dosage and delivery and duration of the interventions in the included studies. In addition, studies on the recurrence of RAS are lacking. So, while this review provides a helpful overview of topical interventions that have been used for RAS the findings should be interpreted cautiously because of limitations in the quality of the evidence.