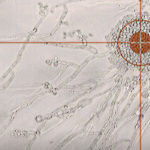 The incidence of oral candidiasis in children worldwide ranges from 22-83% and with increasing numbers of patients using immunosuppressive agents the incidence of oral candidiasis is increasing. Antifungal agents include pyrrole ring antifungal drugs, polyene antifungal drugs, propenyl amine drugs, and second generation triazole drugs. While a number of trials have been conducted there are a limited number of direct comparisons of these agents.

The aim of this network meta-analyses was to investigate the efficacy of antifungal drugs on oral candidiasis.

Searches were conducted in the Cochrane Library, Embase, Medline and Web of Science databases. Randomised controlled trials (RCTs) of antifungal drugs for oral candidiasis were considered.  Two reviewers independently screened and selected studies extracted and cross-checked the data. Risk of bias was assessed using a domains-based approach.  A Bayesian network model based on the Markov chain Monte Carlo operation was used for analysing the therapeutic effects of drugs in 2 groups and multiple groups.

Antifungal drugs have efficacy in the treatment of oral candidiasis. The effect of fluconazole in reducing the risk of the mycological cure rate in oral candidiasis was better than that of other drugs.

The authors have searched a good range of databases only including randomised controlled trials. However, none of the included studies were at low risk of bias across all domains and 20 of the RCTs were at high risk of bias for at least one domain. The authors also indicate that a range of different dosages, administration schemes and variation across age groups was present. In addition, there was insufficient data on recurrence rates and adverse reactions. Consequently, the quality and quantity of the availably literature is low so the findings should be interpreted cautiously.