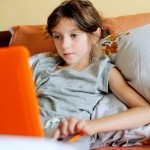 Today and increasing amount of our time in spent gazing at screens of one sort or another be they computers, televisions, videogames or smartphones/tablets.  These sedentary activities raise concerns  related increases in weight and obesity particularly in children with the American Academy of Pediatrics recently recommending that children and adolescents should have no longer that 2 hours of sedentary screen time a day.  There are also concerns that screen time may be linked with cariogenic eating patterns.

The aim of this review was to investigate the association between screen-time behaviour and diet, including a potentially cariogenic diet, in children younger than 12 years old.

Two reviewers independently selected studies, extracted data and assessed the quality of evidence using an adapted version of the Newcastle-Ottawa Scale.  The overall certainty of the evidence was assessed using GRADE . Meta-analysis was planned but not conducted because of the heterogeneity of the included study designs.

Based on the present systematic review an association was found between the time spent by preschool and school-aged children watching TV and poor diet quality, characterized by higher fat and sugar consumption with fewer fruits and vegetables, and increased intake of sugar-sweetened beverages, therefore representing a potentially cariogenic diet. More longitudinal studies with a long follow-up, combined with clinical examinations, are important to establish the relationship between dental caries and screen time. Findings reinforce the importance of adopting different initiatives aimed at health promotion and prevention of lifestyle-associated diseases.

The authors have used a broad range of databases for their unrestricted search encountering in excess of 10,000 titles providing an indication of the level of interest in this topic. After implementing their exclusion criteria of no intervention studies, case-control studies, review articles, case reports, personal or expert opinions and qualitative studies only 176 remained which was reduced to the 19 included studies.  While 14 of the included studies were rated as high quality using the Newcastle -Ottawa scale the studies are all observational and use self- or parent-reported data which may be subject to bias.  In addition, the data only relates is activities at a single time point so may not be representative of long-term behaviour. Consequently, longitudinal data would be needed would be needed to demonstrate causality and clinical examination and or data would be required to assess impact on dental caries.  While all the included studies suggest an association, it should be noted that most of the studies related to television viewing rather than computer and portable media devices which are increasingly prevalent.

Concerns relating to diet and screen time other health concerns have been raised including mental health, cardiovascular risk, fitness, sleep pain and asthma. These have been considered in a recent review of reviews which was summarised recently by our colleagues over at the Mental Elf (The Mental Elf – 12th Aug 2019). That review included 3 other reviews looking at diet and screen time not including this review.

Is too much screen time bad for our children? Perhaps, but how much do we really know?