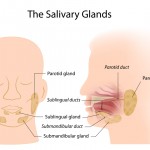 Oral cancer is a global major health burden (Dental Elf – 16th October 2020) with oral squamous cell carcinoma (OSCC) the most common type (Dental Elf – 29th June 2020). The average survival rate is 90% when detected early however, this drops to 50% with late detection (Yeung 2017). Saliva has been considered a diagnostic bio fluid with studies evaluating the performance of salivary biomarkers for the early detection and surveillance of OSCC.

The aim of this systematic review was to identify and summarise the diagnostic accuracy of salivary biomarkers used in the detection of OSCC in adults.

Only studies that evaluated salivary biomarkers and reported measures of diagnostic test accuracy such as sensitivity and specificity in detecting OSCC in adults suspected of having OSCC with no prior treatment (such as chemotherapy or radiotherapy) were included. In addition, studies needed to evaluate the performance of singular salivary biomarkers (index test) against any type of tissue biopsy with histopathological examination (as the reference standard). Studies assessing combined salivary biomarkers or patients with oral potentially malignant disorders were excluded.

The Cochrane Library, MEDLINE via OVID and Embase via OVVID were the databases searched from 2014 to 2018. A tailored QUADAS-2 tool was used to assess the quality of included studies.

…due to the presence of biases and other limitations in the studies reviewed, there is no conclusive evidence of the value of singular salivary CYFRA 21-1 or MMP-2 analyses as screening tools for OSCC at the present time.

This systematic review only included a biomarker if it had three or more studies therefore, only two biomarkers, CYFRA 21-1 and MMP-9 were included. There are a wide range of OSCC salivary biomarkers reported in literature which have not been covered in this systematic review. As this is a novel area for research, the limited number of studies included limits the conclusions that can be drawn. The authors correctly acknowledged this and with the classification of OSCC varying between studies, meta-analysis was not possible. There is the need for a well-designed prospective study investigating salivary biomarkers for patients with OSCC to determine their diagnostic efficacy and translation into clinical practice.