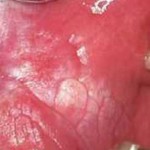 Oral squamous cell carcinoma (OSCC) is the 11th commonest cancer worldwide. There are 369,000 new cases annually with numbers rising.  Treatment for patients with early stage disease with no neck nodes is usually surgical. However, there is debate about whether elective neck dissection (END) should be performed at the time of primary tumour removal.

The aim of this trial (the Selective Neck Dissection study, SEND) was to compare local resection with or without END in early mouth cancer, and in a Western population.

Patients aged ≥16 years with histopathologically confirmed T1/T2 OSCC; no evidence of nodal involvement in the neck (N0); and no cancer of the lip, previous oral/ pharyngeal SCC or other synchronous tumour were randomised using a centralised computer system.  Patients were stratified by age (<40, 40–64, 65+years), tumour stage (T1 and T2) and surgeon.  Data was also collected from a concurrent cohort of patients who declined participation in the trial had their preferred surgery (observational cohort).

For control patients, resection of the primary tumour was done through the open mouth, without neck incisions or neck surgery. Surgeons aimed for a >5mm clearance of the tumour at all margins and in all planes. Reconstruction was allowed but not if it involved any neck surgery.

The test group had standard END involved harvesting lymph nodes from levels I–IV including levels Ia/b and IIa/b on the same side as the tumour (ipsilateral). However, a level l–lll dissection and exclusion of level IIb could be performed if considered appropriate. In cases of recurrence in the mouth or neck, surgery (further resection and/or neck dissection) could be done according to local practice, with radiotherapy and/or platinum chemotherapy as recommended locally based on national guidelines. Baseline imaging scans were mandatory to detect features suggestive of clinically occult neck metastasis and any patients with these features were excluded. Almost all centres used ultrasound with fine needle aspiration cytology (US-FNAC) to detect neck metastasis at the trial outset with universal use by the trial end.

The primary outcome was overall survival (OS; death from any cause, and those who did not die were censored when last known to be alive). Secondary outcomes included: disease-free survival (DFS); loco-regional recurrence, adverse events (graded as mild, moderate, severe, or life threatening/disabling) occurring up to 6 months post-surgery, Health- related quality of life (assessed using the EORTC-QLQ-C30), NHS resource use.

Recruitment was closed early on the Independent Data Monitoring Committee (IDMC) recommendation as data were consistent with the published Mumbai trial showing benefit for END. Patients were followed up for 5 years.

A meta-analysis of this trial and 5 previously published trials of END was conducted.

SEND and the cumulative evidence show that within a generalisable setting oral cancer patients who have an upfront END have a lower risk of death/recurrence, even with small tumours.

This important UK multi-centre RCT originally designed to recruit 620 patients had recruitment stopped early by the independent data monitoring committee as preliminary data were consistent with the published Mumbai trial, which showed a benefit for END (D’Cruz et al, 2015)   In all 255 patients were randomised with 250 patients providing data for overall survival and disease free survival after 5 years which provided sufficient power for some outcomes.

The trial shows a benefit in terms of overall and disease-free survival in favour of the END group.  These findings were also supported by the concurrent cohort of non-randomised patients who were also monitored. In addition to the trial findings a meta-analysis of the 6 RCTS of END for oral squamous cell carcinoma also demonstrating a benefit in favour of END.  While END showed better outcomes this group almost had more adverse effects although these were mainly considered to be low grade.  With a previous study (Acevedo et al, 2016) indicating that END is a cost effective option there may now be enough evidence to amend existing guidelines regarding END for early stage oral cancer.