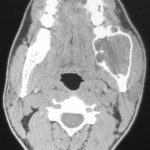 Ameloblastoma is an uncommon benign but locally aggressive odontogenic tumour. Earlier this week (Dental Elf – 13th Feb 2019) we looked at a review that estimate a pooled global incidence rate of 0.92 per 1,000,000 person‐years (95%CI;0.57–1.49). Surgery is the main treatment choice, typically separated into conservative or radical methods dependant on tumour type and clinical presentation.  Unicystic and peripheral ameloblastoma are usually treated conservatively, while solid or multicystic ameloblastoma are often treated radically.

The aim of this review was to assess the outcomes of radical and conservative treatment approaches for solid or multicystic as well as unicystic ameloblastoma in terms of recurrence rates.

Searches were conducted in the PubMed, Embase, Scopus and Web of Science databases. English language studies published between 1969 and 2018 presenting information on ameloblastoma treatment and recurrence rates with histological diagnosis of tumour type were considered.  Care reports and studies providing fewer than 10 cases were excluded.

This review found that pooled recurrence rates for solid ameloblastomas were 8% after radical, and 41% after conservative treatment with values for unicystic ameloblastomas being 3% and 21%, respectively.  While the reviews findings favour a radical approach for both types of ameloblastoma there are a number of important considerations. All the included studies were retrospective case series which a more likely to have selection and reporting biases and as the authors noted that was a lack of important information regarding descriptions of the surgical approach, length of follow up. There was also a lack of data on complications, adverse effects or quality of life data, or other psychological, functional or aesthetic impacts of treatment.  Further high quality well-reported prospective studies that include long-term clinical and patient focuses outcomes are needed.

Ameloblastoma: how common is it?