Home » Posts » Dentistry » oral medicine and pathology » Ameloblastoma: how common is it? 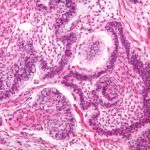 The aim of this review was to evaluate the global incidence of ameloblastoma.

Searches were conducted in the PubMed, Embase, Scopus and Web of Science databases. Only English language studies were considered. Three reviewers independently selected and assessed study quality. A meta‐analysis was conducted and a pooled incidence rate presented expressed per 1,000,000 population.

This review has searched a broad range of databases but restricting the inclusion criteria to English language publication means that some relevant publications may have been missed. While data was reported from 27 countries only Europe, Africa and Australia are represented in the incident rate meta-analysis. There is a lack of detail provided in relation to inclusion and exclusion criteria and the study quality assessment although a process is described.

Although this review provides a useful update on ameloblastoma incidence the lack of detail provided in the review, the potential to have missed relevant studies and the small number of studies that have contributed to the pooled incidence rate calculation need to be taken into consideration when considering the findings.

Last reply was February 15, 2019
Try out our members features!