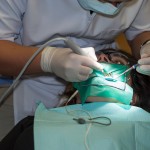 Root canal treatment (RoCT) is a commonly performed dental procedure usually undertaken following the death and necrosis of the dental pulp to relieve symptoms and avoid extraction of the tooth. RoCT has been undertaken using single and multiple visit approaches with similar outcomes being reported with single visit treatment offering potential cost benefits.

The aim of this Cochrane review update was to assess the benefits and harms of completion of root canal treatment (RoCT) in a single visit compared to RoCT over two or more visits, with or without medication, in patients aged over 10 years.

As in the previous two versions of the review, there is currently no evidence to suggest that one treatment regimen (single‐visit or multiple‐visit RoCT) is more effective than the other. Neither regimen can prevent pain and other complications in the 12‐month postoperative period. There was moderate‐certainty evidence of higher proportion of participants reporting pain within one week in single‐visit groups compared to multiple‐visit groups. In contrast to the results of the last version of the review, there was no difference in analgesic use.

This Cochrane review updated the 2016 version and included 27 new studies. However as 5 studies included in the previous version were excluded as they did not use rubber dam isolation or use sodium hypochlorite irrigation this version includes 22 additional studies. As noted by the authors only 10 of the 4 studies had an overall low risk of bias although encouragingly a majority of these were newly added in this version.  As with the previous version of this review the evidence suggests no difference in outcomes between single and multiple visits RoCT with the exception of an increase in pain reporting at one week. The previous version of this review also suggested an increased use of pain killers in single-visit groups however no difference in use was seen in this version.