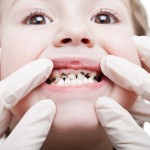 Early childhood caries (ECC) remains a significant public health problem and evidence (Yengopal 2009) and  has suggested that casein phosphopeptide-amorphous calcium phosphate (CPP-ACP) may improve the effectiveness of fluoridated toothpaste. The aim of this study was to see if adding the daily application of a CPP-ACP-containing paste for 1 yr is superior to regular fluoride toothbrushing alone in preventing caries in high-caries-risk pre-school children.

Participants were healthy Thai children aged between 2.5 and 3.5 yrs with normal dentition and diagnosed as high-caries-risk. Children having chronic use of medications or antibiotics, lack of cooperation in the oral examination, allergies to milk protein or benzoate preservatives, presence of oral soft-tissue lesions or enamel hypoplasia examination, or having received a fluoride supplement or professional topical fluoride prior to the study period were excluded. Children were randomised to receive either CPP-ACP (n = 150) or a placebo control paste (n = 146) in addition to fluoridated toothpaste (1000ppm). The main outcome measure was dental caries assessed using The International Caries Detection and Assessment System (ICDAS) recorded at baseline, 6 months, and 1 yr

This trial found that daily application of 10% w/v CPP-ACP paste on school days for 1 yr, when added to regular toothbrushing with a fluoride toothpaste, had no significant added effect in preventing caries in the primary dentition of these pre-school children