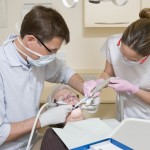 Although dental caries is the world’s commonest disease improvements in oral health have led to increased retention of teeth. As a result of broader improvements in health there has also been an increase in life expectancy in many areas of the world. These trends mean that there is also an increase in the number of teeth at risk of both caries and root caries in older adults. Consequently, identifying the best preventive approaches for this group is increasingly important.

Independently-living older adults (aged 60 and above) with at least one tooth with a root canal lesion (RCL) were randomised to either high-fluoride (5,000 ppm F) or the control toothpaste (1,450 ppm F). Participants were instructed to brush for two minutes twice per day and spit not rinse after brushing. The primary outcomes were the incidence and activity of lesions of RCLs per root at 2 years. Clinical examinations were conducted by a single calibrated examiner. Linear mixed regression model with repeated measures were used to test differences between groups.

Self-administered non-invasive therapy with high-F dentifrices appears to be highly effective in arresting active RCLs and in reducing the onset of new lesions in community-dwelling elders. Treatment with a 5,000 ppm F- dentifrice appears to be an attractive alternative to traditional restorative treatment for older adults, allowing expanded access to care, at a much lower cost and suitable for non-clinical settings.

To date only a handful of RCTs have been conducted on preventive approaches to root caries in older adults as the vast majority of caries prevention trials to date have been children and adolescents.  This RCT was registered at Clinicaltrials.gov and compared 1450ppm and 5000ppm for the arrest and prevention of RCLs. Recruitment to the trial was greater than the estimate of 152 per arm with drop-out being slightly below the anticipated 20% level. Despite the computer randomisation procedure, the authors noted an imbalance in the baseline with patients allocated to the 5,000 ppm group having a higher number of RCLs than the control group. However, a much lower proportion of patients in the 5,000 ppm group developed new RCLs (35.2%) compared with the 1450ppm group (93.5%).  This results in a NNT (Number Needed to Treat) of 1.71 mean that just two patients would need to be treated with high fluoride toothpaste to avoid one new RCL suggesting an effective intervention.

While this paper reports on the outcomes regarding root canal lesions there is no information on adverse effects or whether data was collected. In addition, some of the secondary outcome measures outlined in the initial trial registration, Oral Health Related Quality of Life, microbiological outcomes and salivary flow and not reported in this paper.