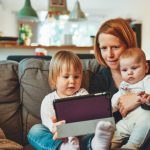 Dental caries is a global problem and prevention of early childhood caries is a challenge. Establishing healthy dietary and oral health practices early is important but many parents experience challenges in establishing good practices. The use of computer games by young children is common with up to 9.5 hours per week being reported. Educational computer games (‘serious games’) are considered to activate prior knowledge and can be used to modify behaviour.

Outcomes assessed were; parent and child satisfaction with their educational intervention assess using a visual analogue scale (VAS); child’s dietary knowledge, scored using a Pictorial Dietary Quiz (PDQ) ;the child’s self-reported snacking and toothbrushing practices recorded in a diary and child view on the game content recorded verbatim to dental nurse-educator who verified game use using a ‘Secret Password Questionnaire’ The primary outcome measure used to calculate the sample size was the participant’s satisfaction with the educational intervention.

the findings of this study suggest that high-caries-risk children and their families find the delivery of oral health education using a computer game highly satisfactory. Using the game can improve children’s recognition of unhealthy food items such as sweetened drinks and non-core foods. The education received can help some families introduce positive dietary changes; however, further research is needed to explore the long-term impact of using this tool for oral health education and how the education delivered to this cohort can be supported by wider health promotion action that facilitates and retains good oral health practices.

This well-conducted study explores the use of a child-friendly ‘serious’ computer game to deliver oral health education. The findings suggest dietary improvement at 3 months. However, these changes are self-reported and the drop out  rate is high with only 55% completing the 3 –month telephone follow-up. While this level of drop out might be anticipated in a sample of children attending for GA the dietary changes should be views very cautiously, a point noted by the authors. Another point to be noted is that this is a short-term study and the long-term impact of this tool would need to be evaluated. It would also be interesting to test this in a group of children not requiring GA.   In relation to the game itself  the authors found that children over the age of 7 of considered  the game was ‘too easy’ so while computer games might provide another medium for the dissemination of oral health education like other approaches that may need to be more targeted.