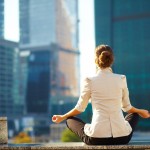 Elly talked about the use of mindfulness to escape the “emotional quicksand” of negative thoughts, and the authors here again focus on the potential for mindfulness to reduce distress, noting that traditional CBT can be effective in treating the positive and negative symptoms of psychosis but that its impact on associated psychological distress is less clear. They refer to a qualitative study of mindfulness for psychosis which found that mindfulness helped develop a more accepting response to their symptoms, for example being able to recognise that voices were transient.

The authors note that Acceptance and Commitment Therapy, which has some parallels with MBCT (both being under the umbrella of ‘Third Way’ or acceptance based therapies) is recommended for treating psychosis in America, but the evidence for mindfulness therapies is unclear.

The authors reviewed the literature on mindfulness approaches and psychosis. They included both inpatients and outpatients with any psychotic disorder.

They included a variety of treatments, including for example Mindfulness Based Psychoeducation and Person-Based Cognitive therapy. They noted that the treatments varied in the extent to which they included formal meditation practice and tended to be tailored in some way for this patient group, such as decreasing the length of sessions or focusing on concrete strategies over the more abstract concepts.

The quality of the studies varied widely. Only 7 of the included studies were randomised, and only 5 used a validated mindfulness measure. Only 2 studies reported intent-to-treat data. The results showed that mindfulness interventions are moderately effective in pre-post studies. When compared with a control group (waitlist, TAU or other treatments), the effect sizes were small to moderate.

The analyses were underpowered, and heterogeneity was moderate to high. It wasn’t clear what criteria the authors used to include the intervention as ‘mindfulness’, which makes it difficult to assess how similar the treatments were and whether it made sense to analyse them together. The authors also raised the point that interventions tended to be tailored, but this raises further questions – are there core components which must be kept the same for a treatment to qualify as ‘mindfulness’ (such as meditation?). Also is there a clinical effect – are tailored programmes more effective? This paper makes for interesting reading, but a number of limitations make the findings difficult to use in practice

The authors reported moderator analyses looking at whether the effect on mindfulness outcomes impacted on clinical outcomes, but only report these for the pre-post studies. This may be due to only a small number of studies reporting such measures – for example, the authors note that only one study reported a measure of compassion, meaning its effect couldn’t be analysed. These kind of analyses are likely to be important in working out the mechanisms responsible for mindfulness (ie. Is it actually the case that a more compassionate approach to oneself reduces psychological distress?) and in identifying what the core components should be, so including consistent measures in future studies will be important. We saw the same problem in the review of psychological and physical disorders, suggesting this is a central challenge currently facing the mindfulness literature.

The authors focus the discussion on the apparent acceptability of mindfulness for these patients, citing low attrition. However, this wasn’t one of the outcomes they were looking at so we should be careful about drawing any conclusions about acceptability. It’s certainly a worthwhile question to ask though, and more systematic evaluations of uptake and attrition could complement the type of qualitative studies mentioned earlier to help us consider whether mindfulness-based treatments really are more acceptable to patients.