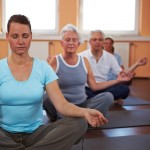 Mindfulness-based cognitive therapy (MBCT) is a group training approach that aims to prevent relapse and recurrence of depression. It combines mindfulness techniques with cognitive therapy and research shows that it is effective at reducing depressive symptoms as well as preventing relapse.

The NICE depression guideline recommends that MBCT is offered to people who have experienced 3 or more previous episodes of depression as an intervention to prevent relapse:

1.9.1.10 Mindfulness-based cognitive therapy should normally be delivered in groups of 8 to 15 participants and consist of weekly 2-hour meetings over 8 weeks and four follow-up sessions in the 12 months after the end of treatment.

[Taken from p.37 of the NICE depression guideline]

This advice is based on the original MBCT trials that were conducted around a decade ago. However, this recommendation has now been brought into question by a new randomised controlled trial (RCT) published this week in the British Journal of Psychiatry.

A group of researchers from Maastricht University in the Netherlands conducted an open label RCT that aimed to find out whether the effect of MBCT on residual depressive symptoms is contingent on the number of previous depressive episodes.

A baseline assessment was carried out and both groups had similar demographic and clinical characteristics. The 3+ group seemed to be more affected by their depression (e.g. they were less likely to be working and had more comorbidity) which is probably representative of real-life.

Trial participants were randomly allocated to one of two interventions:

The authors stated that:

It may be argued that individuals with persistent and harmful residual depressive symptoms originating from a first or second episode should not be denied access to [MBCT] treatment that can improve their quality of life and possibly decrease their risk of relapse/recurrence.

This well-conducted RCT has sufficient power to provide a reliable answer to the targeted question. It also has a larger sample size than the original studies conducted a few years ago, upon which NICE have based their guidance.

Clearly the trial is not without limitations:

Depression: The treatment and management of depression in adults (CG90) (PDF). NICE, Oct 2009.
[Read p.37 of the depression guideline for the section on MBCT]

Last reply was October 8, 2012
Try out our members features!