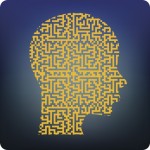 Our colleagues at the Mental Elf  found this small randomised controlled trial looking at the use of memantine for people with Down syndrome and dementia. The trial is being reported in the Lancet.

People with Down’s syndrome are more likely to develop dementia than others and one in three will have the illness as early as in their 50s. Despite this high prevalence, there is very little reliable research about drug treatments for this population.

This small randomised controlled trial (funded by the drug company Lundbeck) aimed to assess the safety and efficacy of memantine on cognition and function in individuals with Down’s syndrome.

This prospective trial involved adults from learning disabilities centres in the UK and Norway (aged 40 and over) with Down’s syndrome, some who had dementia and others who did not.

The main outcome of interest was a change in cognition and function, which was measured with the DAMES scoring system and the adaptive behaviour scale.

They found:
• Both groups declined in cognition and function but rates did not differ between groups for any outcomes
• After adjustment for baseline score, there were non-significant differences between groups of −4.1in DAMES scores, −8.5 in ABS I scores, and 2.0 in ABS II scores, all in favour of controls
• 10 (11%) of 88 participants in the memantine group and six (7%) of 85 controls had serious adverse events (p=0•33)
• Five participants in the memantine group and four controls died from serious adverse events (p=0•77)

The authors concluded:
There is a striking absence of evidence about pharmacological treatment of cognitive impairment and dementia in people older than 40 years with Down’s syndrome. Despite promising indications, memantine is not an effective treatment. Therapies that are effective for Alzheimer’s disease are not necessarily effective in this group of patients.