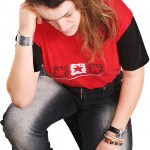 Some time ago, we posted about a case study with two individuals with learning disabilities, where the researchers used eye movement desensitisation and reprocessing (EMDR) to achieve a decrease in posttraumatic stress disorder -like symptoms

Eye movement desensitisation is an approach that developed out of work in the late 80s, based on observations that people experiencing a disturbing thought often had involuntarily rapid eye movement.

If the individual concerned brought those eye movements under control whilst thinking the traumatic thought, they reported that anxiety was reduced.

The standard approach to using EMDR is through a structured eight-phase programme addressing past, present, and future aspects of a traumatic or distressing memory.

The author of this paper was interested in how effective this approach might be when working with an individual with learning disabilities in secure care.

What he did was work through the eight phase protocol using symbol cards with the person, to explore the impact of the person’s experiences in relation to his thoughts, emotional feelings, physical feelings and behaviour.

In addition to the symbol cards, the researcher also used drawings to help the person develop a picture of the traumatic incident. They used a “safe place visualisation technique” at the end of every session to help manage any distress.

In order to measure the impact of the approach, the Posttraumatic Stress Diagnostic Scale (PDS) (adapted for use with people with learning disabilities)  was used both pre intervention and post-intervention. The PDS is a scale used to screen for the presence of post-traumatic stress disorder in people identified (either by themselves or through assessment of symptoms) as suffering from PTSD. Responses enable a rating of symptom severity from mild to severe. 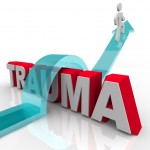 PDS scores at follow up showed gains were maintained

What he found was that the PDS measurements showed reductions in the symptoms experienced by the man in re-experiencing, avoidance and arousal.

Measurements taken at one-month and six -month follow-ups showed these outcomes being maintained.

There is now some evidence from RCTs that EMDR has shown impact on reducing the severity of PTSD symptoms, but there is very limited evidence of its use in people with learning disabilities.

The author concludes that the findings from this case study, following the recommended eight stage protocol, appear to add to that evidence base.

Eye Movement Desensitisation and Reprocessing in the treatment of trauma with mild intellectual disabilities: a case study, Dilly, R, in Advances in Mental Health and Intellectual Disabilities, 8, 1, .63 – 71