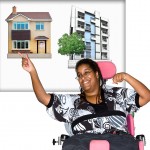 National policy in England has seen people with learning disabilities who were once residents of long stay hospitals move into community services. There have been many evaluations of these moves, locally and nationally.

The authors of this study were interested in measurable factors such as quality of life and mortality. They looked at 521 adults with learning disabilities and complex health problems who had moved from a long-stay hospital into community services including supported living, group homes, or nursing homes

They used the ‘Questionnaire on Quality of Life’ to measure quality of life at baseline, which was at 6 months prior to moving, at 6 months and 1 year after the move. Mortality and causes of death were investigated in those who died within 2 years of relocation.

They found that quality of life improved between baseline and 6 months follow-up but leveled off at 1 year follow-up. Three of the people who moved died during the first 2 years of moving to the community. The authors point out that they all had complex health problems and two died as a result of complications associated with seizures.

Last reply was March 1, 2013
Try out our members features!