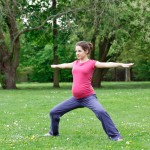 This study is the first systematic review and meta-analysis of randomised controlled trials (RCTs) investigating the effectiveness of exercise as a treatment option in antenatal depression (Daley et al, 2014). “Balls to exercise” Insert exclamation mark or question mark as you see fit.

The authors conducted a literature search of multiple electronic databases, and studies were selected for inclusion if they were RCTs which compared exercise with usual care, a control group or another comparator. Studies were also included which recruited non-depressed, at risk, and depressed participants as the review focused on both prevention and treatment of antenatal depression. Studies were excluded if the intervention was less than 6 weeks (Daley et al, 2014).

The primary outcome was change in depression score between baseline and final antenatal follow-up. The means and standard deviations of the different depression scores were extracted, or calculated if necessary. The standardised mean different (SMD) was calculated in order to summarise the effects across the trials. For the meta-analysis, a random effects model was used, with subgroup analyses in depressed vs. non-depressed patients and aerobic vs. non-aerobic exercise conditions (Daley et al, 2014).

Six out of a total of 919 papers were chosen for inclusion in the review and analysis. Studies were primarily excluded if they were not RCTs, did not measure depression, or compared exercise interventions.

All six studies investigated exercise as an intervention versus a control:

The interventions ranged from 8-12 weeks and were categorised as either aerobic exercise or non aerobic.

In total, there were 406 pregnant women, whose ages ranged from 14-38 and were recruited from 16 weeks gestation.

One study included non-depressed women, and 5 studies included either at risk or participants depressed at baseline (Daley et al, 2014). Exercise during pregnancy may be effective at reducing depression, but bigger and better RCTs are needed before we can be sure of this finding.

Daley et al (2014) present the first meta-analysis of trials investigating the effectiveness as a treatment for antenatal depression. NICE (NICE, 2006), Royal College of Obstetricians and Gynaecologists (RCOG, 2006), and the American College of Obstetricians and Gynaecologists (Artal & O’Tool, 2006) have all stated that women should consider exercise during pregnancy for mental health benefits, and this review provides evidence to support those guidelines.

However, there are a number of limitations that should be considered:

Future research should be based on a larger sample, include a wider range of exercise categories, investigate possible adverse events, and include non-depressed women. While we’re waiting for new research to be published, don’t forget that exercise in pregnancy does of course have all kinds of other undeniable benefits.

Royal College of Obstetricians and Gynaecologists. Exercise in Pregnancy. Statement No. 4. London: RCOG, 2006.