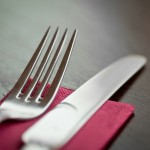 I declare a vested interest. I grew up eating regularly with my family, not seeing it as anything special, just what we did: sometimes a chance to talk about the day, sometimes a time to debate politics and social justice (like whether you or your sister has been given more peas). Now I’m a mother myself, sitting down to eat with my husband and son is one of my favourite things.

Clinically, eating together as a family is something I advocate in treating eating disorders in children and adolescents; I would also suggest it to parents worried that their child might be developing an eating disorder.

Let’s see if this systematic review of the literature supports my gut feeling that eating together can be a positive thing in terms of psychosocial outcomes. 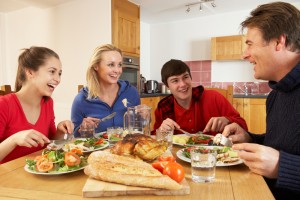 Everyone enjoying their salad AND laughing at Dad’s jokes…perhaps the least realistic family meal photo ever..?

The authors stated aim was to “conduct a systematic review of the effects of family meals on psychosocial outcomes in children and adolescents”. Studies were identified by searching the MEDLINE and PsycInfo databases, and by reviewing bibliographies of relevant papers. To meet the inclusion criteria, studies had to:

Of 1,688 articles screened, only 14 met the inclusion criteria, of which 7 were longitudinal studies. 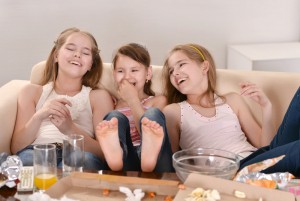 Only 33% of British children in the review reported having “frequent family meals”.

The paper includes an excellent table describing the different studies, sadly their table of results includes a pet hate of mine; referring to results as “statistically significant” without giving us any actual numbers to look at. This lack of point estimates, confidence intervals and effect sizes makes it very hard to interpret apparent sex differences, and to have any sense of the magnitude of the effect of family meals.

I am a reasonably good Elf, so I read one of the original studies for you (Neumark-Sztainer et al, 2008) (I’m not such a good Elf as to actually rewrite the entire paper). This is a nice longitudinal study:

In summary, the lack of numbers and detail in this systematic review leaves me feeling rather under-informed. On the whole, family meals seem like a good idea, especially for girls (and I’m not going to stop even though I do have a boy), but to really answer this question, at the very least we need a better systematic review. 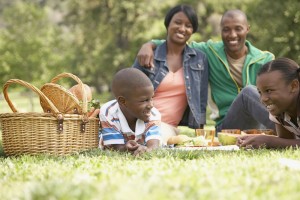 Family meals together feel intuitively right, but this research does not provide much compelling evidence of their value.

Harrison ME et al. Systematic review of the effects of family meal frequency on psychosocial outcomes in youth. Can Fam Physician 2015 Feb;61(2):e96-e106.