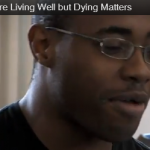 Last week we posted about a study looking at end of life are for people with learning disabilities through the experiences of the staff supporting them.

This week, we would like to draw your attention to a new film that has been produced by CHANGE for Dying Matters and the National End of Life Care Programme.

The film deals with how best to include people with learning disabilities in discussions around death, dying and bereavement.

The film includes people sharing their stories and wishes around how they would like to see other people with learning disabilities supported so they can become more comfortable talking about dying, death and bereavement.