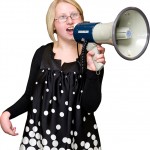 Getting feedback about interventions from people with learning disabilities involves a number of challenges, including of course communication difficulties The researchers in this study were interested in how occupational therapists (OT’s) gathered feedback from people who used their services.

They looked at this by asking 70 OT’s to complete a questionnaire and a subset of 12 of the respondents were also invited to take part in semi-structured interviews.

The researchers suggest from their reading of the responses that OT’s were ‘passionate about service user feedback’, but that informal methods were used rather than established methods with a robust evidence base.

Almost half the respondents did not take measures to reduce the potential for bias when gathering feedback, which the authors suggest may be the result of service pressures, lack of confidence and the complexity of service users’ needs.

The authors conclude that whilst there is a good deal of activity in gatering feedback, that this is currently too unstructrured, not evidence-based and over reliant on informal methods that do nothing to minimise bias. They suugest that “ Occupational therapists need to do more to gain feedback from people with learning disabilities

Gaining feedback from people with learning disabilities, Ball J & Shanks A, in The British Journal of Occupational Therapy, 75,  10, 471-477