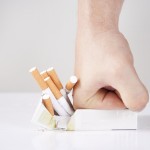 Smoking is the main preventable cause of premature illness and death worldwide. Approximately 20% of deaths in men and 5% in woman over 30 can be attributed to smoking. The World Health Organization (WHO) estimates that 6 million people die from smoking related disease each year, with tobacco being the number one risk factor for non-communicable disease deaths. Indeed, the WHO views reducing tobacco use as a priority with today’s World No Tobacco Day campaigning for a ban on tobacco advertising to reduce uptake of smoking.

But what of those people already addicted to tobacco? Quitting smoking can significantly improve health and wellbeing; unfortunately, many smokers find it difficult to achieve permanent abstinence without support. A number of drug treatments are available to help people to quit smoking.  The three most widely used types of treatment are; nicotine replacement therapies (NRT), bupropion (an antidepressant) and varenicline (a nicotine receptor partial agonist), all of which are licensed for use in Europe and the United States. Bupropion and varenicline are available on prescription, whist NRTs such as patches and gums are also available over the counter.

Treatments such as cytisine have also been used in other countries as a potential intervention, but are not yet widely available. Other therapies such as anxiolytics, selective serotonin reuptake inhibitors (SSRI’s), monoamine oxidase inhibitors (MAOI’s), opioid agonists, clonidine, mecamylamine (both originally marketed to lower blood pressure) and a cannabinoid agonist have also been trialed as potential pharmacological treatments.

The efficacy and safety of these treatments for smoking cessation is the focus of a new Cochrane systematic review published today (Cahill et al, 2013). The authors’ primary objectives were to examine how the most widely used pharmacotherapies compare with placebo, and each other, in achieving abstinence. Other less used treatments were also considered where possible. Secondly, comparisons between the benefits and risks of each treatment were conducted.

The authors conducted a meta-analysis on 12 Cochrane reviews between 2008 and 2012, investigating a total of 26 pharmacotherapies. The analysis consisted of 267 randomised control trials (RCTs) including over 101,000 smokers. Eligible trials had to include a comparable placebo condition, other active pharmacological treatments or a combination of both. The primary outcome was smoking cessation, for 6 months or longer from the start of treatment.

To compare the benefits with the risk of harm the authors looked at any adverse or serious adverse (life-threatening) events, which could have been attributed to the treatment. Adverse events included such things as nausea and insomnia. Serious adverse events included the onset of psychological disorders (such as depression and anxiety), suicidal idealization, neurological events (seizures) or cardiovascular problems.

Using odds ratios (see Szumilas, 2010 for an explanation of odds ratios) the authors conducted direct comparisons between NRT, bupropion and varenicline with placebo. They found that: This review found that NRT, bupropion and varenicline are all effective treatments for smoking cessation Secondary analyses demonstrated that different types of NRT administration (patches, gum etc) were generally as effective as each other. Interestingly, a combination of different NRTs is more effective than single formulations and leads to comparable odds of quitting as varenicline.

Whilst there was a smaller evidence base for other pharmacotherapies such as cytisine and nortriptyline (partly because they are not licensed in Europe or the USA) they also increased the chance of quitting compared to placebo. Of the other alternative pharmacotherapies subject to the meta-analyses only clonidine was found to be an effective treatment (although there were notable adverse effects); SSRI’s, MAOI’s, anxiolytics and opioid agonists generally had poor outcomes.

Efficacy for NRT, bupropion and varenicline is well-established across a strong evidence base.

There was also some evidence that emerging treatments such as cytisine and nortriptyline may also improve odds compared to placebo, but more evidence is needed. Finally, the authors suggest that future research should attempt to determine retrospective safety and efficacy of varenicline and NRT.

Medicines improve your chance of quitting smoking. Lifestyle Elf, 31 May 2013.